On Belay - Ranch Exit Media with Director Chris Patterson aided in the expansion of the Toyota 4Runner "Trail Tracker" website and interactive GPS based project. They expanded the western content with their rugged knowledge venturing to Oregon, Washington, California, and Montana. 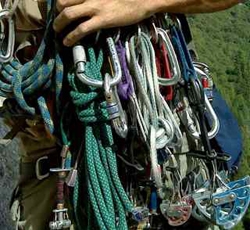 Chris Patterson, a natural leader, has spent his life outdoors in the worlds most extreme and amazing locations. A phenomenal skier, snowboarder, climber, mountaineer, biker, kayaker and fly fisherman puts Chris Patterson in an advantageous position to capture action sports on film. Chris Patterson and Chris Raser of Ranch Exit Films have been working with each other for 15 years and have created a dynamic and powerful working relationship resulting in infinite hours of automotive and extreme sports media. Their goal is to present media in an accessible way to every person through the lense of world-class explorers and travelers.

Ranch Exit’s team along with Director Chris Patterson, drove a 2010 Toyota 4Runner to Mt. Hood Oregon where they hiked the Pinnacle Trail and recorded their every move. Once at the top of Mt. Hood they looked out across the fog and noticed the peak of a Washington volcano they had to conquer. Once in Washington, Mt. Saint Helen’s treated them well. They were able to hike around the perimeter of the volcano and peer into the caldera before getting the urge to ski and heading to Montana. Trail Tracker led them to ski Bridger Bowl and Big Sky where they spent time mastering the heavy western snow. Ultimately Trail Tracker brought them to Yosemite where they rock climbed for a few days and logged it all on a GPS with the help of a 2010 Toyota 4Runner.

For fourteen years Ranch Exit Media has shared with clients their passion for genuine media creation of some of the most unique aspects of the world. They’re still dreaming of the possibilities. The passion that fueled their early years lives strongly on and is evident in the content they continue to create.