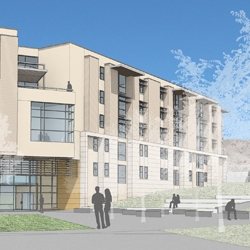 Dallas, TX, August 19, 2010 --(PR.com)-- Barnhart Balfour Beatty has been chosen by the University of California, Riverside (UCR) as construction manager at risk for a LEED Gold-targeted $104 million apartment village to house more than 800 students. In May, the University of California’s Board of Regents approved the 350,000-SF Glen Mor 2 project, which also includes a parking structure, food emporium, and recreational facilities.

“UC Riverside’s goal is to increase on-campus housing to accommodate 50 percent of the student population, including 75 percent of freshman and half of our transfer students,” said Don Caskey, Associate Vice Chancellor, Campus Architect. “Studies show that the university better retains students who live in campus housing, and Glen Mor 2 is targeting the needs of second- and third-year students.”

Glen Mor 2 will build on the success of Glen Mor 1, the on-campus apartment housing that opened in 2007. Following a year of preconstruction planning, groundbreaking for Glen Mor 2 is expected to take place in June 2011, with completion planned for July 2013.

“We are extremely proud to have been selected to build Glen Mor 2,” said Eric Stenman, president of Barnhart Balfour Beatty. “Project teams from Balfour Beatty Construction offices nationwide participated in the proposal effort, drawing upon the very best ideas and skills our company has to offer for the benefit of UC Riverside.”

In addition to apartments for 814 residents, the plans for Glen Mor 2 include community spaces such as meeting rooms, an academic resource center, a computer lab, a fitness room, a student lounge and a swimming pool. The plans also provide for offices and a dining emporium that will serve both residents and non-residents.

A pedestrian bridge will link Glen Mor 2 to Glen Mor 1 and provide easy walking connections to the campus. Barnhart Balfour Beatty and architect Sasaki Associates are sharing preconstruction planning for the project.

Other projects for UCR with which Barnhart Balfour Beatty is involved include the $15-million renovation of the University’s Geology building, which was completed in February 2010 after two phases; the $10.7-million conversion of the existing Statistics Computing Building to a School of Medicine Education Building; and the construction of a $28-million UCR School of Medicine Research Building.

About Balfour Beatty Construction
Balfour Beatty Construction, a leader in the U.S. commercial construction industry for 77 years, provides general contracting, at-risk construction management, design-build, preconstruction, public/private, and turnkey services for public and private clients nationwide. The company employs 2,100 professionals, is a Top 10 Green Builder, and was recently named one of the 100 Best Companies To Work For® in the U.S. by Fortune Magazine. The company is part of London-based Balfour Beatty plc, a global leader in professional services, construction services, support services, and infrastructure investment with over $16 billion in annual revenues. To learn more, visit balfourbeattyus.com.

About Barnhart Balfour Beatty
A subsidiary of Balfour Beatty Construction, Barnhart Balfour Beatty is a full-service general building, engineering and construction management firm with headquarters in San Diego. The company is leading the way in Building Information Modeling (BIM) technology with a five-person in-house BIM department, and it maintains an active design-build division, which fosters an environment of collaboration between architects, engineers, builders and owners. Active in construction management and program management services, Barnhart Balfour Beatty works with education clients throughout the state of California. The company also has a 27-year history of working with the military, constructing a variety of structures including weapons and armament, barrack, hanger and aquatic facilities. To learn more, visit barnhart-balfourbeatty.com (License #439407)

About UC Riverside
The University of California, Riverside (www.ucr.edu) is a doctoral research university, a living laboratory for groundbreaking exploration of issues critical to Inland Southern California, the state and communities around the world. Reflecting California's diverse culture, UCR's enrollment of over 19,000 is expected to grow to 21,000 students by 2020. The campus is currently building new facilities for a new medical school. Its service area has reached the heart of the Coachella Valley by way of the UCR Palm Desert Graduate Center. The campus has an annual statewide economic impact of more than $1 billion.