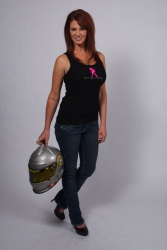 Mooresville, NC, October 12, 2010 --(PR.com)-- As production for “The Ride” heads to the starting line, V1 Entertainment Films has announced that top-ranked female race car owner/driver Jennifer Jo Cobb of the #10 Driven team will play a recurring role as herself and be a creative consultant for the motorsports-themed ensemble project, to be directed by acclaimed film and television actor/director Giancarlo Esposito of AMC’s “Breaking Bad.” Cobb currently is experiencing a record-breaking season in the NASCAR® Camping World Truck Series as she is competing to finish the season higher than any previous female in one of NASCAR's top-three series.

“The Ride” is a character-driven story targeted as a 2011 replacement series about the exploits of a tight-knit group of drivers from different worlds set in the Lake Norman area of North Carolina, north of Charlotte, often called Race City USA. Esposito will direct and is creatively involved in every detail from casting to soundtrack, while veteran WGA screenwriter Tony Sommo is – in true motorsports style – incorporating themes from advertiser/sponsors into the script. Cobb has agreed to make regular on-screen appearances as herself as well as provide insights from her life as a female racer in a traditionally male-dominated sport.

The flame-haired Kansas native, who began racing professionally in 1991, is NASCAR's only female owner/driver. She fell in love with motorsports as a child cheering on her father, Joe Cobb, whose accomplishments date back to 1976 and include hundreds of victories and accolades, including a track championship and “Most Popular Driver” award. The elder Cobb continues to compete at Lakeside Speedway, a half-mile dirt oval in Kansas City, KS, while rooting for his daughter to make racing history this season.

Jennifer Jo Cobb will be a unique communications asset to “The Ride,” having graduated with an A.A. in Pre-Journalism and for two years was the popular co-host of Inside Motorsports, a television program on Time Warner Cable’s Metro Sports TV Channel. Off the track, Cobb is pursuing a degree in Broadcasting and is a registered professional speaker who appears at more than 50 engagements annually.

“It is through vision, determination and perseverance that Jennifer Jo Cobb rose to the top of her sport,” noted Aspen Hughes, CEO of V1 Entertainment Films. “Besides growing up in a racing household, Jennifer’s speeches contain many anecdotes about her experiences and travels, which will no doubt ring true in storylines of ‘The Ride.’”

Hughes emphasized that authenticity is of paramount importance to the show’s success, so, to that end, V1 Entertainment Films has been locking in food, automotive and packaged goods companies to be advertiser/sponsors who participate in the story arc of “The Ride.”

“Faced with a diminished passive audience, advertisers have had to revise their marketing strategies and find other ways of connecting with their key constituents to promote their products,” said Hughes. “‘The Ride’ is a real win-win for them. Marketers know that maintaining authenticity and giving viewers a glimpse into the off-track drama of motorsports will ensure a loyal audience week after week.”

Product sponsors who join “The Ride” work directly with all key decision-makers on every aspect of production, right from the start, to achieve their marketing objectives in an organic way. In addition to Cobb, V1 Entertainment Films’ personal and professional relationships with professional motorsports drivers, teams, tracks and off-track locations assure the kind of authenticity that both sponsors and viewers demand. “The product sponsorship opportunities are diverse and will give the right partners a terrific return on their investment,” said Hughes.

He added that having Esposito on board has “brought new perspectives to the project,” and when it is picked up, Esposito will likely continue to take the director’s reins. The popular star had been seeking more opportunities to direct since producing and directing the 2009 independent film, “Gospel Hill,” which, despite its small budget, afforded Esposito a chance to direct such Hollywood talents as Angela Bassett, Danny Glover, Adam Baldwin and an uncredited Samuel L. Jackson.

For more information and sponsorship opportunities with “The Ride,” visit www.V1EntertainmentFilms.com.

About Jennifer Jo Cobb:
Kansas-native Jennifer Jo Cobb is a NASCAR Nationwide Series, NASCAR Camping World Truck Series and ARCA Racing Series driver as well as a national spokesperson, registered public speaker and television personality. Between race events, Cobb does appearances for her sponsors, participates in charitable events, speaks to corporate and community groups, runs her businesses and works for the Richard Petty Driving Experience. Cobb focuses on an athletic, healthy and active lifestyle and strives to inspire young women to go for their dreams.

Jennifer Jo Cobb’s love of auto racing began with her father, Joe Cobb’s, racing career. His accomplishments date back to 1976 and include hundreds of victories and accolades, including a track championship and “Most Popular Driver” award. Joe Cobb continues to race at Lakeside Speedway, a half-mile dirt oval in Kansas City, KS.

Off of the track, his daughter Jennifer is a business professional with almost two decades of marketing and advertising experience. She holds an Associates degree in Pre-Journalism and is working on her broadcasting degree. For two years, she co-hosted Inside Motorsports, a television program on Time Warner Cable’s Metro Sports TV Channel. In addition to appearing on the cover of the national racing magazine, Stock Car Spectacular, she has been featured on local and national radio programs and has headlined in newspapers across the country.

Cobb’s career in racing, broadcasting, journalism and professional speaking has always had her in the public eye. Having achieved her goals of competing in the NASCAR® Nationwide Series and NASCAR® Camping World Truck Series, her future ambitions include eventually racing full-time in the NASCAR® SPRINT Cup Series as well as giving back to women in the military. For more information, visit www.CobbRacingTeam.com

About V1 Entertainment Films:
V1 Entertainment Films is a worldwide film fund actively engaged in bringing unique, compelling stories to movie theatres and television. The company is committed to discovering properties propelled by compelling characters and original situations that demand to be projected and offer the potential for profit. In an industry that has earned a reputation for sometimes questionable business practices, V1 Entertainment Films offers unprecedented transparency. Because they offer personal service at all levels of the organization, they safeguard that all projects are conducted with complete clarity and integrity. For more information, visit www.V1EntertainmentFilms.com