Any Controversy Over "Bushwacked (Bewildered, Beat-Up Bad and Broke) Song is "Misguided and Unfair," Says Its Composer and Producer

Ever since the August 1 launch of the "Bushwacked (Bewildered, Beat-up Bad and Broke) album, featuring a lead single of the same name, C.R. Ecker, composer and producer of the song, and album, has met resistance among those who feel the single and music video represent an attack on President George W. Bush, just based on the title without hearing it. Rather, he says, "I wrote and recorded the song in 1991 as an 'anthem of American angst' during the recession then, a song more timely now." 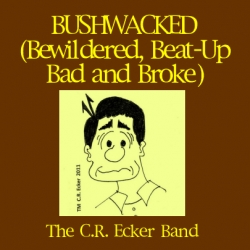 C.R. Ecker makes that claim after an Orange County (CA) Fair “meet and greet" as part of an album launch promotion. He says a group of fan-goers accused him of “another George Bush-bashing” song just based on hearing the title name and seeing promotional shirts bearing the full album title.

Ecker explained that was not possible as the song was written, and recorded, in 1991. He also pointed to the “Bushwacked Sing-along Video” on YouTube as another indicator that the song is apolitical. The album was released August 1 with ten traditional and contemporary country songs reflecting a variety of country themes and styles.

Additionally, Ecker arranged for a Facebook posting to 750 Republicans soliciting reaction to the song just after the launch. “But over ten days, the message got no response whatsoever, presumably because of misinterpretation of the word ‘Bushwacked,’” notes the former Communications Director for the GOP candidate who challenged the Democrat incumbent in the 35th California Congressional District Race last year. "There can be no other explanation."

“I made it clear the lead song with its alliterative title is an ‘anthem of American Angst’ that all Americans, no matter their politics, should rally behind in these troubled times, more challenging than when I first wrote the song twenty years ago. But I realize there have been approximately one half-dozen videos with the word ‘Bushwacked’ or ‘Bushwhacked’ produced over the past decade antagonistic to the former President.

“My song and video should not be lumped among them. There is no finger pointing in either and that is clear to anyone hearing the song or watching the video.”

Ecker adds that he was not influenced in writing the song title by former President George H.W. Bush, “a man I hold in high regard.”

The album, so far ignored by traditional AM and FM country stations, is available in the United States and worldwide through all major digital music download services and the lead song broadcast via several Internet Radio services, world-wide.

A portion of the proceeds from the album sales go to Wounded Warrior Project and D.E.L.T.A. Rescue, a large no-kill animal sanctuary north of Los Angeles.