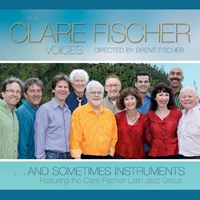 Grammy-winning American jazz composer, arranger and pianist Dr. Clare Fischer has devotees in all corners of the world. This month his fans get to enjoy two new albums from the prolific artist, his 50th solo album, The Clare Fischer Voices ...And Sometimes Instruments and his 51st, titled: Continuum with The Clare Fischer Big Band.

On the vocal album, ...And Sometimes Instruments you'll discover 20 songs with originals like "Tom Cat" (written for his favorite feline), "Pan Pipe Dance," and Latin jazz staples such as "Bachi (also composed for a family pet) with new arrangements from Brent Fischer of "Morning," the wildly popular classic from the Fischer song catalogue. Also included are Fischer renditions of much loved standards like "Mood Indigo," and "I Should Care." The album showcases the Fischers' jazz, Latin, choral and symphonic influences. "Each song presents a different orchestral coloring because of the variety of voice and instrument combinations used," says producer Brent Fischer.

"Nearly 50 people contributed to each album, including players of unusual instruments such as contrabass sax and alto trombone," says Brent Fischer who is director of all the Clare Fischer bands that include: The Clare Fischer Voices, Latin Jazz Group, Big Band, Clarinet Choir and The Clare Fischer Jazz Corps.

...And Sometimes Instruments was recorded at the Fischer compound in Studio City, California.

Continuum was recorded at Glenwood Place in Burbank and Conway Studios in Hollywood.

The Fischer team continues to create musical magic arranging and orchestrating for Grammy winning artists. Some of the legends the Fischers have worked with include: Prince, Michael Jackson, Raphael Saadiq, Branford Marsalis, Paul McCartney, Usher and Brandy.

Clare credits his son Brent for bringing his vision for these albums to reality. "Several years ago I asked Brent to see that it all gets done. Having absorbed my style over the decades, he is uniquely qualified to direct these recordings, in some cases finishing works for me so that, at my age, I can just listen and enjoy," says Clare.

It was only during archiving Dr. Fischer's music library that Brent discovered many of the hidden gems on the albums. "I was inspired to make these recordings because much of the music was composed and arranged for no other reason than the sheer joy of doing so," says Brent, whose supportive production style ensured plenty of positive energy was flowing among the musicians during the sessions. "These are deeply personal albums for me and I'm grateful to the wonderful musicians who gave their all to make these albums a reality," says Brent Fischer.

Grammy-winning American composer, arranger and pianist Dr. Clare Fischer has secured an honorable place in jazz history. Born on October 22, 1928 in Durand, Michigan, he worked with jazz legends such as Donald Byrd and Dizzy Gillespie before becoming the go-to-guy for arranging pop albums from the 80s to the present. His influences range from Stravinsky to Ellington to Jobim. Dr. Fischer's symphonic works like Rhapsody Nova, and The Duke, Swee'pea and Me, are performed by symphony orchestras around the world. A multi-instrumentalist who earned two degrees at Michigan State University, Fischer also received an honorary doctorate from his Alma Mater for his outstanding contributions to the field of jazz. He has also scored music for TV and motion pictures, and with the help of his son, Brent Fischer (a composer/arranger in his own right), Clare made the leap to popular music, writing charts for Prince, Paul McCartney, Cal Tjader, Poncho Sanchez, Rufus and Chaka Khan, Brandy, Raphael Saadiq, and Carlos Santana.

Clare Fischer on Wikipedia
"Clare Fischer was a major influence on my harmonic concept… He and Bill Evans, and Ravel and Gil Evans, finally. You know, that’s where it really came from. Almost all of the harmony that I play can be traced to one of those four people and whoever their influences were." -- Herbie Hancock

Working professionally in the music industry since age 16, Brent Fischer has enjoyed a wide variety of roles as arranger, composer, producer, conductor, book editor, and a music ethnologist, performing and recording worldwide with groups from more than 20 different countries on 10 different instruments. Fischer has a Bachelor of Music Degree in Symphonic Percussion from California State University, Northridge. As a writer, his three-dimensional musical palette makes use of many lesser known orchestral instruments effectively and effortlessly to create a distinct aesthetic. His arrangements for pop, jazz and R&B royalty include artists such as: Michael Jackson, Usher, Toni Braxton, and Al Jarreau. http://www.studioexpresso.com/profiles/brentfischer.htm