Half of dentists are still placing amalgam fillings, while the other half no longer do, according to a survey conducted by The Wealthy Dentist. Many dentists expressed concerns over the possible toxic consequences of mercury amalgam and prefer to place newer composite fillings. Other dentists pointed to the superior performance of amalgam fillings and raised questions over the safety and durability of composite materials. 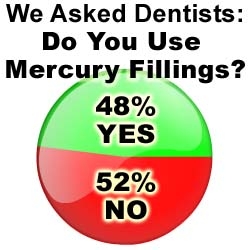 Tiburon, CA, May 07, 2007 --(PR.com)-- Dentists are deeply divided over the issue of mercury amalgam fillings. In a recent dental marketing survey conducted by TheWealthyDentist.com, 52% of dentists reported they are no longer using mercury amalgam. The other 48% are still placing amalgam fillings. Some dentists criticized amalgam for its possible toxicity and tendency to fracture teeth; other dentists defended amalgam's long history and superiority to more modern composite fillings.

There is a significant difference between general dentists and specialists on the issue of mercury amalgam. Though about one out of two general dentists still uses dental amalgam, fully four out of five specialists are using amalgam. In support of amalgam, specialists cited the lack of scientific evidence proving its toxicity and its superiority in certain situations.

"Amalgam is a durable and cost effective restorative material," said one Colorado prosthodontist. "I believe dentists who refuse to use mercury amalgam are misinformed." A prosthodontic colleague from Kentucky agreed: "Dentists who advocate elimination of dental amalgam are building their practice at the expense of the rest of the profession. Dental amalgams are perfectly safe." As one California dentist said, "As long as ADA and FDA say it is safe, then that is good enough for me."

Suburban dentists were least likely to use amalgam. "I practice in an affluent town," said a general dentist from suburban New Jersey. "Amalgam fillings would not be acceptable to my patients." Commented an Idaho dentist, "Amalgams are great; they just look so bad that nobody wants them." A Virginia doctor agreed, saying, "Patients just don't want them any more, regardless of the higher cost of resins." A California dentist was even more blunt: "Amalgam is very unaesthetic and boring to do."

Even dentists who preferred composites acknowledged the benefits of amalgam fillings. As one Nebraska doctor wrote, "Amalgam is my friend. Larger composites after three to five years usually look worn and leaking." A New York dentist defended the dental material: "Although we place amalgam restorations rarely, there are occasions where this is truly the most appropriate restorative material. Dentists who have completely eliminated it from their practices are really doing their patients a disservice by not giving them a safe, reasonable option."

Some questioned how mercury, a known toxin, could possibly be a safe material for dental work. "It's a toxic waste when I remove from someone's body, but not when it is in a human body?" asked a Washington dentist. "Mercury is one of the most powerful neurotoxins known," said a Pennsylvania doctor. "We can't put it in landfills, and any excess has to be picked up by hazardous waste haulers. Yet we can bury a filling that is 50% mercury three inches from a person's brain?"

A number of dentists also questioned the safety of composites, a material far newer than amalgam. "Composite is not inert; it releases formaldehyde. What foreign material would you rather have in your mouth?" asked a Connecticut dentist. "There are big concerns with bis-phenol A components of resins," mentioned a Wisconsin doctor. "Unlike composite... amalgam does not release estrogen as a byproduct," warned a New York dentist.

Many dentists pointed out that amalgam works better in certain situations: on posterior teeth, in wet situations, on elderly patients, for children's primary teeth, for patients prone to cavities and/or with poor dental hygiene, for uncooperative patients, for large or subgingival restorations, and in areas of the mouth that are difficult to reach or isolate. Amalgam's lower price was also a factor for poorer patients or those whose insurance will not cover composites.

The durability of amalgam fillings was cited by a number of dentists. "For all those who say this is a horrible material: how many 20, 30 and even 40 year old amalgams do you see out there?" asked a Florida doctor. Commented a Louisiana dentist, "They are the most durable of all restorations, with the exception of gold, that are available at this time." A Texas doctor agreed, saying, "Until I find posterior composites that can last fifteen or twenty years, I will continue to offer the amalgam as a restoration."

Amalgam fillings can lead to fractured teeth, a problem cited by many dentists. "While it may still be a safe material for use, its long-term use leads to cracked and broken and often devitalized teeth," said an Arizona dentist. "In my 30 years of practice, I have observed the failure of amalgam to adequately restore teeth; 99% of the time it is the source of fractured teeth," agreed a Kansas doctor.

Many respondents mentioned that it had been five, ten, twenty, or even thirty years since they had placed an amalgam filling. "I stopped using amalgam in 1984. The 3M composites I placed then are still serving my patients today," said a Colorado dentist. "I haven't used it for over 12 years," commented a North Carolina doctor. "Even if it was a beautiful, tooth-colored material, it would still suck... big-time!"

"Mercury is a toxin," wrote a Missouri dentist. "We all seem to be concerned about the welfare of the patient, but I worry about the long-term effect of exposure to mercury to dentists and staff. For the last ten years, I have been conducting a research study on this very topic. I have discovered that all dentists and staff who either place or remove mercury fillings have extremely high levels of mercury in their systems. Some of the offices, like mine, do not place mercury fillings; they only remove them." A Texas dentist agreed, saying, "I have high levels of mercury in my system based on testing with my doctor."

Though the survey's wording was designed to be neutral, the usage of the term "mercury amalgam" was criticized by some doctors as biased terminology. Although the word "amalgam" has come to mean any mixture, it originally referred only to mercury-based metal alloys. According to the older definition, "mercury amalgam" is a redundant term, and "silver amalgam" more accurately describes the mixture of mercury, silver and other metals used in dental fillings.

Said one Wisconsin dentist, "When we were in dental school we were taught they were 'Silver Amalgam' fillings. 'Mercury Amalgam' is a term invented by the media." A Pennsylvania doctor agreed, saying. "Were you to list all of the ingredients of either material, nobody in their right mind would want them in their mouth."

"Dentists are so passionate about the controversy over amalgam that we received a record number of responses to this survey," said The Wealthy Dentist founder Jim Du Molin, a dentist consultant and dental website design guru. "The ADA says amalgam is safe, consumer groups insist it's dangerous, and the FDA still hasn't made an official ruling. It's been used in dental work for over a thousand years and saved untold numbers of teeth. But they used to say it was okay for pregnant women to smoke, so really, how are you supposed to know what's safe?"

For additional information on this and other Wealthy Dentist surveys, as well as more dentist comments, visit www.thewealthydentist.com/survey.

The Wealthy Dentist is a dental marketing and dental practice management resource featuring dental consultant Jim Du Molin. The site’s weekly surveys and dental newsletters are viewed by thousands of dentists across the United States and Canada. The Wealthy Dentist is a sister company of the Internet Dental Alliance, Inc. (www.internetdentalalliance.com). IDA is the largest provider of dental internet marketing websites, email patient newsletters and dental directories in North America.