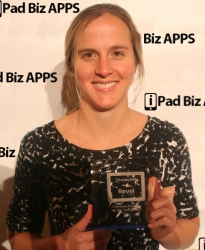 San Francisco, CA, February 01, 2012 --(PR.com)-- On January 31, 2012 Revel Systems was officially announced as the winner of the Business iPad App of the Year Award. This weekend at Macworld | iWorld, it was clear early on that the Best Business iPad App awards came down to two remarkable companies: Square, led by Jack Dorsey, and Revel Systems, led by female entrepreneur Lisa Falzone. Both of the nominees were a hit with the crowd, and both were in the payment industry, which is the fastest‐moving market for iPad apps. Even though voters were presented with an impressive field of nominees, the battle was clearly dominated by these two competitors

While competition was fierce between Square and Revel, here’s a breakdown of the vote: First of all, users chose Revel Systems as the most useful business iPad app. Revel was also found to help with a wider array of business functions, with seven to Square’s four. Square was found to have over 100,000 users, while Revel Systems has fewer than 100,000. As far as which offers the simplest user interface, both companies were tied. Finally, users chose Revel Systems as the company with the best customer support.

In the end, Macworld users declared Revel Systems iPad POS the winner. Lisa Falzone, CEO and co-founder of Revel Systems, told iPad Biz Apps today that “Revel is honored to have won such an award, and thanks all of the voters at Macworld | iWorld for voting for them.” A wide range of powerful apps were represented, but Revel’s sophisticated level of functionality and wide range of applications led to its selection as the best iPad business app.

Even though Square has been nominated for a Crunchies award, and has over 100,000 customers, users found that it only supplies a payment app. On the other hand, Revel Systems offers a fully functional Point of Sale system to manage every task that store owners encounter on a daily basis. This can explain why Revel has landed deals with many heavy-hitters like Popeye’s Chicken in Georgia (popeyes.com), Illy Coffee in San Francisco (illy.com), U-sushi in San Francisco (u-sushi.com), Camille’s Sidewalk Café in Oklahoma (www.camillescafe.com), and other big franchises. On the other hand, Square’s clientele is largely restricted to businesses that only require a few simple operations, including farmers’ markets, taxi cabs, and street vendors.

Now that the competition is over, Ms. Falzone is back to leading Revel Systems to the top of the Point of Sale marketplace. She has raised $3.7 million in her “A” round of funding last year and is gearing up for her “B” round. The recent victory of Revel Systems has cemented Ms. Falzone’s place among today’s top women entrepreneurs, and she looks looks forward to the future of what Revel Systems will accomplish. Moving forward, the company hopes to facilitate growth through its open API, which allows all companies to integrate into Revel—creating new opportunities for local commerce to thrive into the future.