Gridlock: Why We’re in It and How to Get Out

A new book that presents a clear explanation for why the government is becoming dysfunctional and highlights a way out of the morass. It doesn’t describe what government should or shouldn’t do – but how American governance should be modernized. Not a rehash of left or right views and ideas, it is instead a fresh examination of cause and effect that has resulted in a failing system. 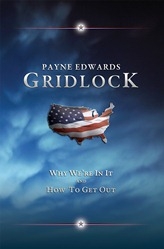 Orlando, FL, March 02, 2012 --(PR.com)-- Signalman Publishing is proud to announce the release of "Gridlock: Why We’re In It and How to Get Out" by Payne Edwards.

Gridlock: a complete lack of movement or progress resulting in backup or stagnation. In this era of the TEA party, Occupy Wall Street, massive budget deficits and trillions of dollars in debt, our federal government finds itself gridlocked – seemingly incapable of making any progress in solving the most pressing national problems. In this groundbreaking new study on not just how the federal government works, but the system of governance, Payne Edwards dives into the root causes and issues of why we have gridlock and then offers solutions that originate in the U.S. Constitution and the tools that it provides.

Refreshingly devoid of partisan accusations, and written from a viewpoint that most Americans truly want what is best for the country, this book provides an insightful look at how the federal government has become gridlocked, why it has come to dominate the governmental system and the consequences of its over-involvement. It offers a way forward with a package of reforms that reflect American values and traditions.

John McClure, president of Signalman Publishing stated, "The author has really done a fantastic job of researching the history of the U.S. Constitution, how it came to be ratified, the concerns that the states had in its ratification, and the tools that it provides today that can be used to solve these huge problems." Anyone concerned with the current trajectory of the United States would be interested in reading "Gridlock."

Payne Edwards is a writer and consultant with personal experience in federal and local government. His interactions with elected officials and civil servants convinced him that the vast majority of them are smart, competent people who want the best for the country, and yet the government has grown incompetent and can’t seem to govern effectively. This disconnect between the people in government and the institutional failings of government inspired him to look at systemic causes of gridlock. Before he devoted his time to writing, he served on nuclear submarines in the U.S. Navy, represented the US Government at NATO headquarters in Belgium, provided defense budget and policy analysis for the administration and Congress, and spent a year as a Federal Executive Fellow at Brookings. He has a BS in Naval Architecture and a MA in political science. He lives near Fredericksburg Virginia.

Signalman Publishing is an independent book publisher based in Kissimmee, Florida. Signalman has a wide range of thought-provoking literature from non-fiction titles on economics and military strategy to literary fiction.

From the Preface: National politicians are stuck in a bipolar partisan deadlock while the country continues to plunge toward insolvency and nothing sane is done. The conventional wisdom is that there is an ideological divide that must be decided to achieve a plurality to take the government in one direction or the other. The current ideological divide is not about the proper limits of government. It is a divide between reality and propaganda... between those who believe there is a never ending supply of money and those who think the country is broke... between people able to exploit the federal government and those who suffer under its weight.

Gridlock: Why We're In It and How to Get Out