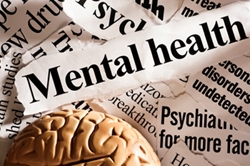 Redlands, CA, March 23, 2012 --(PR.com)-- Even with all of the medical breakthroughs we have today, mental illness remains a topic we rarely discuss in the media and yet the Substance Abuse and Mental Health Services Administration (SAMHSA) reported over 45 million people in the US had at least one mental illness in 2009 with 11 million of those considered serious.

People are not getting the information that tells them to seek treatment.

This is especially disturbing since the World Health Organization considers mental illness responsible for more disability in developed countries than any other illness group including heart disease and cancer. Mental illness not only weakens our people, but our country. It impacts the entire family, a person’s ability to work, be productive, and fully enjoy life.

Even those with depression or anxiety disorders that have tried to seek medical treatment may not have received relief even after experimenting with several treatment options under a doctor’s supervision. Some say they feel, “Something is still not right.”

There is hope for these patients with a new treatment option that is also non-evasive and painless called Transcranial Magnetic Stimulation Therapy (TMS). Psychiatrist Dr. Tarique Perera will explain how this treatment works on Smart Health Talk Radio show, March 22 at 4:00 pm PST on KCAARadio.com. KCAA is a broadcast and internet radio station where people can tune in live through radio, internet, or cell phone. Podcasts are also available 24/7 after the show.

To understand the importance TMS as a revolutionary new treatment for depression, anxiety, and substance abuse you only need to look at the statistics. The SAMHSA survey analysis reported that in 2009 at least 19.9 percent, or one in five people experienced mental illness. Unfortunately out of ten people that need treatment, less than four of them will get it.

Large subgroups go untreated. Different levels of mental illness can be present in those sick with disease, seriously hurt or disabled from accidents, and as we age, but can go unnoticed because the physical sickness is so overwhelming. With the aging of baby boomers, this problem will only continue to grow.

The CDC reported last year that antidepressants were the most used drug for people aged 18-44. The National Health and Nutrition Examination Study looked at 12,637 participants and found that nearly one in four women ages 40 to 59 are taking antidepressants, as well as one in 25 teens. Most antidepressant users are not under the supervision of a mental health expert.

The United States has the highest mental illness rate in the world and an equally high addiction to pain killers. The US uses over 80% of all pain killers manufactured in the world and 99% of the Vicodin. These drugs are not only impacting our mental state, but are killing us as well. “Vicodin and other narcotic pain relievers killed more people than car accidents in 17 states,” according to Dr. Thomas Frieden, director of the Centers for Disease Control and Prevention. Vicodin is an opioid that is essentially legal heroine and could mask underlying mental illness.

With mental illness being such a taboo subject, most people are not learning about the physical symptoms or genetic risks. Some may suspect they need help, but may choose to not seek treatment for a variety of reasons including cost and lack of confidence in drug therapy.

For people that have felt depression, anxiety, or substance abuse treatments did not bring them the results they were looking for, or have not tried to seek help even when they know they need it, there is now a new revolutionary non-evasive treatment option that could change psychiatry forever.

Transcranial Magnetic Stimulation Therapy (TMS) is delivered while the patient sits upright in the machine. A magnetic coil is positioned by the part of the brain that affects mood. This part of the brain is usually underactive in those with depression. The machine sends impulses that stimulate neurotransmitters to work and increase oxygen delivery by increasing blood flow.

The treatment is still new, but initial results are showing low relapse rates, with most relapse cases responding to additional treatments. Patients usually start off with a series of 20-30 treatments, five times per week that are given over a 4-6 week period. Each treatment lasts about 30-40 minutes. There are no side effects and patients can drive to and from their appointments without need assistance.

Even if you miss the broadcast with Dr. Perera, this podcast and our other Smart Health Talk podcasts can be found on www.SmartHealthTalk.com. Just click podcast.
Contact
Smart Health Talk
Elaine McFadden, MPH, RD
909-556-4460
www.smarthealthtalk.com
www.kcaaradio.com 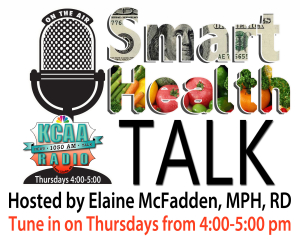 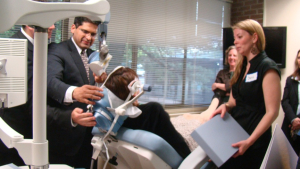