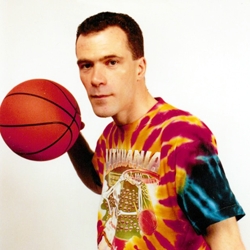 San Francisco, CA, October 17, 2012 --(PR.com)-- The anticipated basketball documentary "The Other Dream Team" has hit select theaters and will be coming to the rest of the country in the coming weeks. Directed and produced by Marius Markevicius and Jon Weinbach, "The Other Dream Team" is a sports and political documentary about the national Lithuanian basketball team that competed at the 1992 Summer Olympic Games.

It highlights Lithuanians’ experiences behind the Iron Curtain, where elite athletes were subjected to the brutalities of Communist rule. As they hid from KGB agents and feared for their lives, Lithuania’s basketball stars always shared a common goal – to utilize their athletic gifts to help free their country.

Aside from the hardships on the road to the 92′ Olympics, the film celebrates the infamous tie-dyed uniforms worn by the Lithuanian Olympic team featuring Speirs’ trademark design, the Slam-dunking Skeleton, now a historic piece of Lithuania’s basketball culture.

The Slam Dunking Skullman Skeleton Trademark design that you saw on Tie Dyed jerseys in the 1992 Barcelona Olympics and in "The Other Dream Team" documentary film was created by New York sports illustrator and artist Greg Speirs. His Slam Dunking Skeleton became a legendary icon for the team and for the country of Lithuania. At the 1992 Olympics in Barcelona the Men’s Lithuanian Olympic Basketball Team stepped up to the podium to receive their bronze medals and wore Speirs' design for the world to see. Speirs' additional sponsorship and major part in this story remained in the background in lieu of the more important names involved until now. The documentary includes a short clip of Greg Speirs describing the inspiration behind the shirt as more people begin to learn the whole story:

The meaning behind the image:
“The 1992 Lithuanian Basketball Team represents what happens in freedom…people excel. The struggle of the Lithuanian team struck a chord with me so I decided to come up with an image which I believed represented them. I came up with the Slam Dunking Skeleton because it symbolized a team coming up from nothing and the ashes, and rising up to overcome the obstacles, which are represented by the hands reaching up in the image. Instead of representing death, this skeleton represents a new life and rebirth. If you could condense this story down to just one phrase it wouldn’t just be Freedom but Freedom and Free Enterprise” - Greg Speirs.

After being seen on the 1992 Olympics podium the shirts started selling and became the most sought-after collectible. Speirs then acquired the status as the major sponsor of the team by donating 100% of his profits generated from the sales of the trademarked “Slam Dunking Skeleton” featured on those famous t-shirts that funded the team beyond the 1992 season to the 1996 Olympics. He donated all the rest to Lithuanian children’s charities and a Lithuanian basketball school which amounted to over $450,000.