Narroway Publishing LLC, Announces the Release of "And God Laughed" a Novel by Dr. Roy A. Teel Jr.

Narroway Publishing LLC and its imprint: Narroway Press have released the first novel by Dr. Roy A. Teel Jr. Dr. Teel an ordained minster and author of several biblical works has his character converse with the divine on the concept of religion, abortion, pre-marital sex, homosexuality and death and much more in this fictional novel.

Lake Arrowhead, CA, February 04, 2013 --(PR.com)-- A recent survey conducted by the Pew Forum on Religion and Public Life, titled “Religion Among the Millennials,” reports that "Americans ages 18 to 29 are considerably less religious than older Americans. Of those individuals, only about 25 percent of the millennials align themselves with a specific religious group." See: http://www.pewforum.org/age/religion-among-the-millennials.aspx

Biblical scholar and Doctor of Divinity Roy A. Teel, Jr. asserts, "In the past the definitions of religion and spirituality were in alignment; however, with the increase of growing awareness of the excesses of the church and an overall disillusionment with religious leaders, more people are seeking new and more personal definitions for their own beliefs."

Teel continues, "Young adults today question what it means to be spiritual rather than religious. We see the popularity of alternative spiritual observances and practices like yoga and meditation. Does this indicate a trend toward being spiritual but not religious? Perhaps the most startling observation is that 64 percent of those surveyed do believe that God exists; however, they have chosen to adopt some kind of alternative personal practice." See Pewforum.org. "Perhaps this trend reflects the possibility of people becoming disillusioned with religion as they have come to know it, and reveals their effort to seek answers within themselves based on something other than traditional dogma."

Dr. Teel, an ordained minister with PhD’s in Divinity and Biblical Studies, contends that, "Man has developed religion for various purposes; whether it was to exert control, instill morality, or stroke egos. Organized, structured religions do everything but remove god from the equation. You go to elaborate churches to worship, confess your sins to a clergy member, and are told what to pray and when. These actions, while intended to bring you closer to God, have the opposite effect. All those factors remove you from God, rather than bring you closer."

"On the other hand," suggests Teel, "spirituality resides within a person where it is either nurtured or abandoned. It might be started by a religion or, indeed, a personal revelation, but that's where it comes from. Spirituality is chosen while religion is often times forced. True spirituality is something that is found deep within oneself. It is your way of loving, accepting and relating to the world and people around you. It cannot be found in a church or by believing in a certain way."

Teel continues "The Pewforum survey, shows that traditionally, faith passes from parents or other family members then religious leaders to religious followers. A change is evident though, as regular people embrace the idea that spirituality is a grassroots adventure of seeking God, a journey of insight and inspiration involving authenticity and purpose that might or might not happen in a church, synagogue, or mosque."

Dr. Teel explains, "People are disillusioned overall with the structures that they have relied on for hundreds of years to provide their moral compass. There is a gap between the new spiritual orientation and the institutions that have lost their way. People want to feel connected and part of a greater community that is dedicated to peace and the welfare of all its citizens. If this cannot be so, if the church cannot adapt and provide for the many seekers who want a more personal connection with the Divine, then it will suffer fewer and fewer parishioners and eventually die. So indeed, religious institutions may not be in their death throes yet, but for many people, yes, religion is dead."

Biblical scholar Roy A. Teel, Jr. is the author of the novel And God Laughed, one man's adventure into the mysterious realms of the human mind, spirit and immortal soul, a conversation between man and the designer of the universe. The book is available in hardcover and as an eBook at amazon.com here: www.amazon.com/And-God-Laughed-ebook/dp/B00B1K9ZKY/ref=sr_1_1_title_0_main 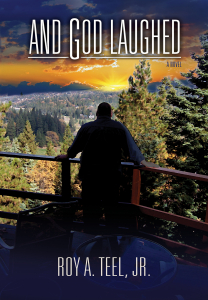 And God Laughed, A Novel

Imagine that you had the opportunity to speak to God and ask Him any questions that you like. That's exactly what happens to Justin after a visit to a local book sale in his small mountain town. His mind and emotions spin wildly as he encounters a book titled: Does God Exist?