Rotating Updated Missing Child Pictures When the Computer is Idle 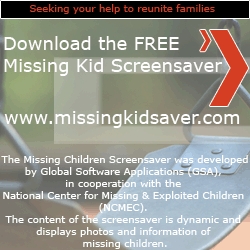 Washington, DC, August 01, 2007 --(PR.com)-- The National Center for Missing & Exploited Children® (NCMEC) today announced a new tool for engaging the public in their search for missing children. “Missing Kid Saver” is a screensaver that will use idle computer power to display important images and information about missing children. The software is an opt-in service and is available for free download at www.missingkidsaver.com. Global Software Applications (GSA), a private software company based in Philipsburg, PA, developed the software.

“Nearly 800,000 children are reported missing each year in the U.S. and thankfully, most are recovered quickly,” said Bob O’Brien, Executive Director, Missing Children Services at NCMEC. “Unfortunately, there are many who don’t get to go home right away and for those that remain missing it is vital that we all get involved in the search.”

Once downloaded to a user’s computer, “Missing Kid Saver” will function like a normal screensaver, appearing when the computer is left idle for a set period of time. It will rotate images of missing children that correspond to the user’s region of the country. The images and information are pulled from NCMEC’s database.

“Almost everybody knows that in the idle mode their computers display a nice picture, swimming fish or others. Now everyone can put all that wasted computer power to work for a noble cause,” said Ron Koning, Vice President of GSA. “Think about the impact when schools, libraries, police barracks, fire stations and large offices display the missing child photos on their computers. A computer in a larger office space or at home works like an E-Billboard. Rotating pictures on a computer screen draws attention; it makes people talk, opens up discussions and in the best possible scenario reunites a family.”

“Missing Kid Saver is a partnership of NCMEC, GSA, and all those who are online and want to help search for these children,” said O’Brien. "We’re offering this new tool because we know that photos work. In fact, one in six of the children featured in our photo distribution effort is recovered as a direct result of the photo. This is an opportunity to work together to help bring missing children home.”

About the National Center for Missing & Exploited Children
NCMEC is a 501(c)(3) nonprofit organization dedicated to helping protect children from abduction and sexual exploitation. NCMEC’s congressionally mandated CyberTipline, a reporting mechanism for child sexual exploitation, has handled more than 494,000 leads. Since its establishment in 1984, NCMEC has assisted law enforcement with more than 133,000 missing child cases, resulting in the recovery of more than 115,700 children. For more information about NCMEC, call its toll-free, 24-hour hotline at 1-800-THE-LOST or visit www.missingkids.com.

Halfway into 2005, Global Software Applications/ SurferQuest introduced an interactive real-time publication of missing child photos on their public computers in hotels, resorts and internet cafes and was referred to by the Associated Press as “Modern Day Milk Cartons.”
1-888-733-4365.