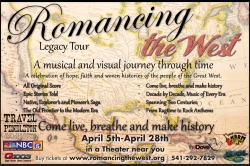 The Romancing the West Tour, a narrative-style concert featuring an ensemble of acclaimed performers will launch this spring, telling the epic story of the American West. The musical and visual presentation journeys across a rich cultural history of 240 years, from the Native tribes, the Spanish Missions and Gold Rush to the Great Depression and The Sixties. A diverse group of musicians will perform an original score that capture the eras, from ragtime to rock, swing bands to folk tunes. The shows kickoff in March at landmark theaters along Main Street America,offering audiences a unique visual concert experience.

This multimedia theatrical presentation was inspired by Duane’s vision and includes period costumes and full-screen imagery, reflecting significant times over the last two centuries, from the beauty of the Native people’s culture when the West lay untouched by time, to exploring the Oregon Trail to building the railroads and the preservation of the majestic lands. Concertgoers will enjoy an entertaining and educational production for all-ages that boldly remembers the tragic and celebrates the triumphant episodes in Western History. “Romancing the West” covers themes across the decades of social and political change to celebrate the pioneering human spirit and diverse legacy of the American West.

Historical venues in small towns along the West Coast on the tour include the Rogue Theater in Grants Pass, Oregon and The Tower in Bend, as well as the Autry National Center of the American West in Los Angeles. In addition, some acts will integrate their better-known songs into the program, such as Melanie’s signature anthem “Candles in the Rain” and Iron Butterfly’s classic “In a Gadda Da Vida.”

For dates and theater locations visit www.RomancingtheWest.org. Portions of proceeds will benefit “Oh Oregon Frontier Park and Cultural Center” and its interpretive history walk and children’s camps. The show is sponsored by Oregon Historical Society, and Travel Pendleton. For booking call (541) 292-7829. 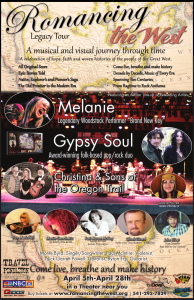