Polycrete engineers announce two more advancements that make it easier to design and build energy efficient structures that stand up to Mother Nature. 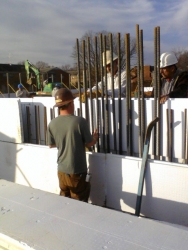 Richmond, VA, May 29, 2013 --(PR.com)-- Polycrete’s engineering and manufacturing folks have come up with two more advancements that will make it easier to design and build energy efficient structures that stand up to Mother Nature.

A few months ago they announced that size really does matter. Well, height does too. Since they already make Polycrete Big Block™ in 12”, 18” and 24” heights, they thought the industry would want the option of mixing and matching panel heights on each block. They call this innovation Polycrete Split Block™.

So if a project has a slab turning down into an ICF wall and calls for 24” height on the outside of the wall and 12” on the inside, the contractor doesn't have to rip the ICF form in the field anymore. Polycrete can make it to order.

Any concrete core width from 5-1/2” to 24” in three different heights that can be mixed and matched on the same block. It just keeps getting easier.

Standard EPS has a minimum R value of 4.00 per inch at 75 deg. F. BASF’s Neopor is nearly 15% higher, at 4.53 per inch. Tiny graphite particles added to the EPS act as infrared absorbers and infrared reflectors which greatly reduces thermal conductivity.

That means the EPS insulation alone is at least R22.65 and an R30 wall is much easier to achieve. As always, the R values quoted here are minimum ratings under ASTM C518. Some ICF manufacturers may claim their products carry higher R-values than this. If they claim it, make them back it up with their test results.

Polycrete Big Block™ is a commercial grade insulated concrete forming (ICF) system. ICFs are forms for building reinforced concrete walls. The forms stay in place after the concrete cures and serve as insulation for the building. Sheetrock attaches directly to the ICF on the inside and all conventional exterior finishes attach directly to the outside surface.