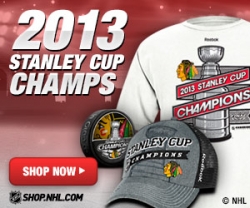 Chicago, IL, June 28, 2013 --(PR.com)-- Dedicated hockey fans who cheered on the Chicago Blackhawks as they won against the Boston Bruins in the Stanley Cup finals, can show their support for the team by sporting official fan gear from the NHL Store.

The largest online selection of authentic authorized hockey merchandise, the NHL Store, is the place to go when looking for official Blackhawk team gear like NHL jerseys, team hats, T-shirts, and hockey pucks. To commemorate the historic win, die hard fans can even score an eight inch replica of the Blackhawks 2013 NHL Stanley Cup.

Along with Stanley Cup gear, the NHL store has licensed products for fans of all 30 franchised member clubs. From signed collectibles to clothing for the whole family, it is the premier online destination for anything related to professional hockey.

“MyReviewsNow.net is thrilled for the Blackhawks, and we are excited to join with the NHL Store to congratulate them on their win over the Boston Bruins,” commented Todd Maxwell of MyReviewsNow.net. “It was a hard won series with two evenly matched teams. We're happy to help the fans celebrate with their team by offering them the all the authentic gear they need to show their Blackhawk pride and support. Whether they are looking for official NHL jerseys or a miniature of the Stanley Cup to put on their bookshelves, they can get it all here.”

NHL fans who are ready to stock up with their Chicago Blackhawk Stanley Cup gear have the opportunity to do so when they check out MyReviewsNow.net’s Sports Portal. In addition to shopping at all their favorite stores and taking advantage of exclusive discounts, fans can take part of the helpful community at MyReviewsNow.net. They will be able to read reviews left by other shoppers regarding previous experiences with products and stores, and they can submit their own reviews for others to learn from.

An Internet shopping site offering fan gear, tickets to sporting events and thousands of other services, products and publications available online, MyReviewsNow.net is a business directory that sets itself apart from similar sites by offering both professional reviews and consumer reviews on the Internet’s hottest offerings in a fun, simple format that is easy for visitors to shop and enjoy. Plus, MyReviewsNow.net is 100% free, open 24/7, and the best way avoid crowded malls and parking lots.
Contact
MyReviewsNow
Todd Maxwell
863-646-7075
myreviewsnow.net