Hal Ross, President of RP Toys, will release his new thriller novel on November 6, 2013. "The Deadliest Game" weaves a horrifying and unthinkable tale of a terrorist plot against U.S. consumers using a toy company and the owner as a key to the plot's success. 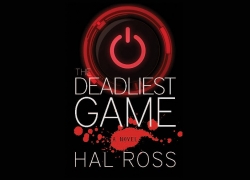 Carlsbad, CA, September 12, 2013 --(PR.com)-- A new thriller combining a suspenseful crime narrative against the backdrop of the toy industry will be coming out just in time for this year’s holiday season. Hal Ross’s “The Deadliest Game” intertwines the unthinkable tale of a terrorist plot against U.S. consumers with the scenario of a toy company’s proprietary distribution of a new industry groundbreaking electronic game. When forced to make a decision between his own daughter’s life and the lives of thousands of other children, Hal’s leading protagonist, Blair Mulligan, must make a choice no father should ever have to make.

A toy industry veteran with over thirty-five years experience, Hal offers the reader an insider’s perspective of a surprisingly interesting and competitive business. His book reads true, and therefore is all the more frightening.

"The Deadliest Game" will be released as hardcover and eBook on November 6, 2013 and is currently available on pre-order from Amazon.com.

For the launch and marketing of “The Deadliest Game”, Hal has engaged the award-winning advertising agency Creative Bube Tube, who will help spread the word through both social media and television, including a contest awarding a Kindle Fire, signed copies of the book, and a $100 Amazon gift card.

Creative Bube Tube is a full-service advertising agency serving medium to large clients from across the globe in health and lifestyle, pharmaceutical, sports, food and beverage, automotive, and other industries. From creative ideation to results, they have produced over 400 television campaigns since opening in 2006. With representation from east to west in both the United States and Canada, the agency has received numerous prestigious national and international awards. To learn more about the power of video production and TV advertising, email jenny@creativebubetube.com or call 1-855-282-3882 today.
Contact
Creative Bube Tube
Nina Spaeth
1-760-438-7440
www.creativebubetube.com