Nathanael Mortensen game designer launches another noteworthy kickstarter project to raise money to print a richly illustrated deck of playing cards that will be printed by USPCC, Bicycle Branded. 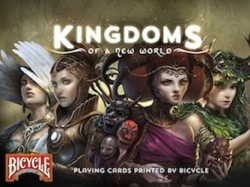 Now Nathanael is on his second Kickstarter project: Kingdoms of a New World Playing Cards. Kingdom's of a New World is a beautifully illustrated deck of bicycle quality playing cards illustrated by the same artist who did the art for Dragon's Hoard which so many people loved. This new card deck has had a smashing entrance into the kickstarter community raising half it's needed goal to be printed in one day.

The artwork on the cards simply are breathtaking. Jonas, the illustrator, who is creating the artwork for the deck is a master of his art. He has done movie posters, book covers, games, portraits and many more exciting projects.

Cards from the project.