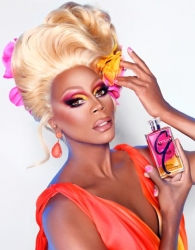 Hollywood, CA, November 14, 2013 --(PR.com)-- Supermodel of the World and first face of M.A.C. Cosmetics, RuPaul has joined forces with Colorevolution to launch RuPaul’s Glamazon, a beauty collection that includes a fine-fragrance and ultra-rich pigment cosmetic line.

"Glamazon is for women and men of all ages and preferences who share one thing in common: They are not afraid to be fierce," said the world’s most famous drag queen.

Glamazon features the most essential elements needed to create one of RuPaul’s signature looks. Each collectable gift box offers high quality products for an outrageous value. "For me, glamour should be accessible to all, I am committed to helping the world look and smell more beautiful," said RuPaul.

With over 5 groundbreaking seasons, RuPaul’s Drag Race has become a pop culture phenomenon. Airing in over 35 countries around the world, the RuPaul's Drag Race franchises have a combined reach of 3.5 million Facebook likes and command 1.5 million Twitter followers. The star studded 6th season premieres on Logo TV in early 2014 will feature a surprising Glamazon challenge!

Starting now at Colorevolution.com RuPaul’s Glamazon is available for pre-order, then on November 21, 2013 at Ricky’s NYC and other fine fragrance and makeup stores throughout the US.

Ricky’s NYC is the one stop super-shop for everything beauty. The Queens from RuPaul’s Drag Race, may appear at several Ricky’s locations during the 2013 holiday season and throughout the premier of RuPaul’s Drag Race – Season 6 on Logo (early 2014).

About RuPaul
RuPaul skyrocketed to international fame with the CD release of Supermodel of the World, which was followed by roles in several feature films and TV sitcoms, the host of The RuPaul Show (VH1) and morning drive radio on WKTU & WNEW. RuPaul has been a spokesperson for WebEx, Rockport as well as the first face of M.A.C. Cosmetics. RuPaul is the author of the autobiography Lettin' It All Hang Out and Workin' It: RuPaul's Guide to Life, Liberty & the Pursuit of Style. “Glamazon" is RuPaul’s 9th and latest studio album. RuPaul is the Executive Producer and host of the global phenomenon "RuPaul's Drag Race" on Logo, entering into its 6th season.