Belgian 3D Printing Pioneers, Materialise, Honored with a Visionary! Award by the Museum of Art and Design in New York 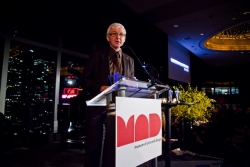 New York, NY, November 22, 2013 --(PR.com)-- Materialise is proud to announce that on the evening of November 20, Materialise and its Founder and CEO Wilfried Vancraen were among those honored with a MAD Visionaries! Award in New York City in recognition of Materialise’s commitment to technological innovation in 3D printing. Every year, the Gala honors leaders and innovators in the fields of art, design, philanthropy, and business, who through their work demonstrate foresight, imagination, and a commitment to supporting creativity in all its forms.

The Museum of Art and Design chose Wilfried Vancraen as one of this year’s honorees due to the more than twenty years that Materialise has been working with designers and scientists to help expand design, manufacturing, and biomedical research into new frontiers, while remaining committed to artistic creativity, sustainability and the improvement of people’s lives. The award was also granted on the occasion of Materialise’s inclusion in MAD’s newest exhibition, Out of Hand: Materializing the Postdigital (16/10/2013 – 6/7/2014). Included in the exhibition are some of the most compelling creations from the past decade ranging from sculpture and furniture to fashion and transport - many of which were produced through 3D Printing at Materialise. Wilfried Vancraen holding a Quin.MGX by Bathsheba Grossman for .MGX by Materialise- one of the pieces included in MAD’s Out of Hand exhibition.