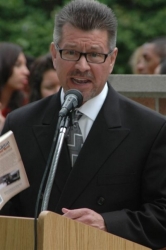 Chicago, IL, March 25, 2014 --(PR.com)-- 10,000 American youths lose their lives to violence each year. This statistic has led Chicago civic leader, Robert Renteria to invite politicians and the community to a conversation about K-12 Best Practices, his publicist announced today.

With an emphasis on cooperation and collaboration, Renteria seeks to exchange proven tools with civic engagement to contribute to the creation of peaceful communities, cities, and nation.

Renteria is challenging politicians, educators, the public, and problem-solvers to help distribute tools which resolve some of the most pressing issues facing Chicago and the nation today.

The author says, "I donate school-based and faith-based curricula because I'm frustrated by schools and programs spending not just millions, but billions on classroom best practices that are clearly not working."

"If it's not working, it's not best practices," says Renteria. "President Obama and his Senior Administration have spent an enormous amount of money at the national level to no avail. Kids are still joining gangs only to end up being killed. Chicago Superintendent of Police, Garry F. McCarthy says he can't solve the problem, and the solution to the problem has to come from the community. Furthermore, I have built this program on my own time and dime putting my money where my mouth is. This is my solution.

"I spoke with a senior school official who admitted that they know what they are doing is not working. So, I said, 'The reason you do it is because of unions, contracts and your paychecks'. They agreed."

The civic leader says Barrio curriculum is part of radical, affordable and actionable steps that can stop the trend of Chicago violence, crime, and murders. He is asking for assistance as he presents and donates curriculum backed by a strategic plan for distribution at the local, regional, and national levels.

"To quote Aristotle, 'Educating the mind without educating the heart is no education at all', emphasized Renteria. "It's time for the country to use these tools to help save the children. We have lost too many kids to gangs and violence. Here's a solution that is actually working. This challenge deserves the attention that Michelle Obama's anti-bullying program has."

Robert Renteria further explained, "I share curriculum which bridges the educational gap and helps our kids with their critical thinking skills.

"The bilingual books series 'From the Barrio to the Board Room, Mi Barrio and Little Barrio' and curricula can help change the landscape for our youth across America and around the world.

"I am calling people out because it is the right thing to do. I have sent letters, packages and e-mails that received no response, and made numerous phone calls that never were returned. I am challenging educational and political officials to do the job taxpayers paid them to do."