Finally a Portal to Connect to the Many Faces of Faerie

World of Froud and Big Ben Parliament Creations (BBP Creations) have announced the release and launch of their new app for iOS devices, “Faces of Faerie.” 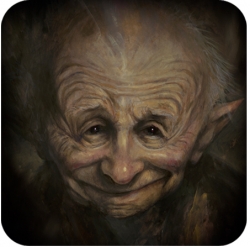 Reno, NV, September 17, 2014 --(PR.com)-- Over the past six years a partnership has developed between world-renowned UK faery artists Brian and Wendy Froud, and US artists Nicholas and Holly Reviglio. Together, the two husband-and-wife teams discovered a way to share the Frouds’ unique talent for connecting to the world of Faerie. As an encore to their previous app, “Froud Meditations: Pathways to Faery,” the Reviglios bring the Frouds’ magic to a worldwide audience by means of Apple's iDevices.

Creative work began over two years ago when Brian Froud connected through the veil to the land of Faerie and painted the faeries’ individual portraits. With a collection of over 50 portraits, Froud wondered how he could share them with the rest of the world. The Reviglios happened to be in Dartmoor at the time—wrapping up their previous app—when brainstorming began.

"You never know when an idea will strike. It was one of those moments where Brian was sharing with us portrait after portrait and we all began brainstorming and ideas were flying," stated Holly Hartzell-Reviglio, Art Director of the Frouds’ previous app. "We didn't have enough time to fully flesh out the idea of the app until we saw them again in the spring of 2013 while they were developing the book."

The app unfolded alongside the creation of their new book, Brian Froud's Faeries' Tales. Stated writer Wendy Froud, "When you connect with a faery, you connect with a whole world—a world just waiting to be discovered and explored by you!”

This portal brings a touch of Faerie to everyone interested in connecting to another world via their iDevices. Users can take a photo of themselves, which will transform into a faery with a message or simply touch the screen to form a connection to the realm of faerie and a faery will reveal itself and a personal message.

“Faces of Faerie” is a unique experience that showcases 48 new faeries from the Frouds’ new book. Once connected to a faery, users have the ability to share their findings through email, messaging, Facebook and Twitter. As Brian Froud commented, “Seeing faeries has never been easier!”

Nicholas Reviglio engineered the app’s coding. Remaining true to the Frouds’ vision, he created an app with the feel of a book, yet with the ability to be digitally autographed by the artists. The result is a truly unique and original program: “This app is more than just an app, it is an experience. The magic of the moors, Brian’s artwork and the faeries all play into the atmosphere this portal creates.”

“Faces of Faerie” will be released on September 17th on iTunes for all iDevice models.

The Frouds are recognized worldwide for their artwork, books, and the films Dark Crystal and Labyrinth. Brian is considered the preeminent fairy artist of our generation, while Wendy’s mixed media models have been exhibited in museums and galleries throughout the U.K., Europe, Japan and the U.S.A. September 12th will premiere their new Exhibition, Brian Froud’s Faeries’ Tales, at Animazing Fine Art Gallery in SoHo, NYC. Several book signings are planned in the UK and across NYC in October. Please visit afanyc.com or worldoffroud.com for more details.

The App Spec Sheet contains screenshots and information regarding the app.