Understanding the ROI implications of buying into the Super Bowl or other expensive sponsorships is relevant to all advertisers, large and small. Advertisers can make media decisions with their emotions or their brains. An important tenant of a great new book, “David vs. Goliath: Guerrilla Media Buying for Small Business…” is to “Buy Smart” if you want to get up to 200% more bang for the buck. 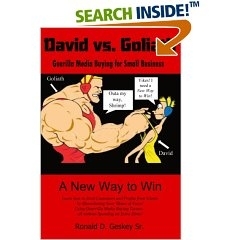 Auburn Hills, MI, November 01, 2007 --(PR.com)-- The Super Bowl is exciting to watch and debate and bet on. The media O.D. on it for weeks. It makes for spirited conversation at the water fountain and in board rooms. But does all of that excitement make it a cost effective sponsorship which will pay out?

A new book (available on Amazon.com) by Ron Geskey, "David vs. Goliath: Guerrilla Media Buying for Small Business, A New Way to Win," says no.

Geskey reports that earlier this year, the Association of National Advertisers (ANA) called for increased ROI and accountability for advertising spending. The ANA recommended reducing the use of television (because of its declining effectiveness), along with greater utilization of non traditional media.

Yet, a cadre of elite advertisers spent an estimated $200+ million on Super Bowl XLI activities (Bears vs. Colts), an investment which, in our opinion, has little (or no) chance of payback. At up to $2.6 million per :30, plus very expensive commercial production, talent, and promotion costs, the smallest total investment in the Super Bowl likely averaged around $4 million, while large sponsors shelled out a total of $20-30+ million.

According to marketer and author, Ron Geskey, setting emotion and ego set aside, what are some of the more important ROI related considerations for deciding whether to Super Bowl or not to Super Bowl. If there is no other information, Media Analysis 101 and common sense can help spot good and bad media investments. Here are some important considerations:

1. What is the Actual Total Super Bowl Investment? - The first step is to determine the total cost of the Super Bowl sponsorship. The time cost of $2.6 million per :30 may be only the tip of the iceberg. Why? Most advertisers also produce expensive new commercials brimming with special effects and celebrity talent to run in the Super Bowl (often costing $1-2+ million each). (And these spots sometimes run only in the Super Bowl.) Talent-wise, all of those celebrities in the ads come with a very high price tag. And finally, we can't forget the cost of promotions, POS materials, and other communications developed to leverage Super Bowl sponsorships.

2. Rating Size - Not Related to ROI - At least 90% of the discussion about the Super Bowl as a media vehicle is about its ratings (audience size). Duh, yes, the Super Bowl normally generates the largest audience of anything on the air -- a 41.6 household rating in 2007. That translates to each commercial, on average, going into about 42 million homes with 100+ million potential viewers.

*But, so what? Reaching all those folks at the same time might make good media and cocktail party fodder, but, alas, the existing research finds no correlation between rating size and advertising effectiveness.

* 500% Cost Premium Makes ROI Difficult - At the risk of offending some of you intuitive decision makers (who get riled at being reminded about what something costs), it is especially important to analyze the Super Bowl because of the magnitude of the investment and the cost premiums required. For example, if we assume that the minimum average cost of a "sponsorship," is $4 million (including one :30 @ $2.6 million, production & talent & promotion), is a mere $4 million, the CPM homes would approach $100, about 500% more than first quarter prime time, plus we'll throw in a promotion. That simply means, to pay out, somehow, Super Bowl ad exposures have to be at least 5 times more effective than ad expsures in other quality media vehicles.

4. But People Watch Super Bowl Commercials! - True, commercials have become a Super Bowl attraction (despite being panned somewhat this year). But even if we assume that somewhere between 75-85% of the Super Bowl audience is paying full attention when "your" commercial comes on, compared to 70-75% for select prime time programs, the relative cost effectiveness of the Super Bowl remains little changed.

The implication is that, if the likelihood of ad exposure in the Super Bowl is similar to other quality media vehicles, given a 500% cost efficiency premium, at least 75% of the investment is wasted, i.e., that's $3 million out of a $4 million investment or $15 million out of a $20 million investment. Regardless, it's enough to turn old John Wanamaker over in his grave ("I know that half of my advertising is wasted, I just don't know which half.")

5. But Doesn’t the Excitement of the Super Bowl Have More Consumer Impact? If we stopped our analysis here, we would conclude that the Super Bowl is overpriced by perhaps 300-500%. But is an ad in the Super Bowl environment so much more impactful or persuasive with consumers that it's worth the price? To address this question, we reviewed some of the recent research on Super Bowl advertising effectiveness which was conducted by leading advertising research companies. No incremental impact was found by any study.

About “David vs. Goliath: Guerilla Media Buying for Small Business…”

“David vs. Goliath” is a new book especially for small/mid size business owners, entrepreneurs, and others who want to grow their business, but may lack the capital to “make over the entire business—e.g., location, facility, merchandise, positioning, pricing strategy, etc. Instead, many small businesses can increase Share of Market and Profit by increasing their Share Voice-- by using and buying traditional and non traditional media more efficiently and effectively. David vs. Goliath teaches readers the basics of what they need to know to plan and buy media to realize 50-200% increases in effectiveness and ROI. Read about it at:

Ron Geskey, CEO of 2020:Marketing Communications LLC, has over 30 years of senior account and media management experience at Leo Burnett, D'Arcy, Campbell Ewald and General Motors R*Works. He has a masters degree from Southern Illinois University, doctoral work at Texas Tech, and professional education at Northwestern, Wharton, and MSU.