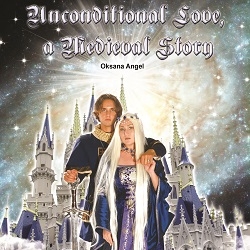 Dan Mathews, Billboard-charting DJ/producer and Program Director at 105.9 FM http://krycfm.com comes from a club DJ and radio DJ background with his first major gig with a radio mix show on POWER 102 KPRR. From there he went on to other radio stations and landed a gig in Alamo City and San Antonio, TX. Dan also had a radio mix show on 1067 JAMZ on Sunday Nights called the Freestyle Files. Dan has since been given a whole fleet of syndicated radio shows he now hosts in the US and internationally.

“The Kingdom of Angels™ has a very strong and appealing message that resonates with the hearts and minds of people of all ages. The music is soothing, enchanting and magical; the lyrics and melody are inspiring. We expect to make a significant impact among the spiritually-oriented audiences with Oksana’s uplifting single “Unconditional Love” that carries inspirational messages of inner peace, joy and kindness.” – Anthony Meyer, Producer
Multi-platinum record producers Chris Johnson (“My Immortal” by Evanescence) and Richard Bosworth (“Time to Say Good-Bye” by Sarah Brightman) compare Oksana’s warm vocals to the angelic-sounding voice of Sarah Brightman (“Symphony”, “Dreamcatcher”), the hypnotic sound of Enigma (“Sadness”, “Principles of Lust”) and the sensual notes of Sade (“Soldier of Love”, “Lovers Rock”).

“Unconditional Love” is a mesmerizing song about pure, selfless and unconditional love that transforms hearts from within. This is the essence of the Universe and everything it is made of.

– Oksana Angel
The “Kingdom Of Angels” is a fantasy world of Light, Peace, Compassion, Love and Magic expressed in the spiritual music about angels and their unconditional love for humanity. Oksana delivers angelic messages of Love in every song, every note and every step of the journey she’s on.

To get a digital copy of this magnificent fruit of multi-talented collaboration, go to https://itunes.apple.com/us/artist/oksana-angel/id319110995 or www.OksanaAngel.com

The forthcoming debut album “Unconditional Love” will be released in English and Russian on the Kingdom of Angels Records. For exclusive promo materials, product announcements and pre-sales, sign up on Oksana’s FanSpace page at http://www.oksanaangel.com/fanspace.html
Contact
Kingdom of Angels
Anthony Meyer
(818) 770-0220
http://www.OksanaAngel.com