Most general dentists fully support the fluoridation of community water supplies, according to a recent Wealthy Dentist survey. However, a vocal minority is concerned about the possible side effects of such "mass medication." 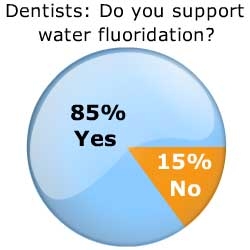 San Francisco, CA, December 03, 2007 --(PR.com)-- A recent Wealthy Dentist survey asked dentists if they are in favor of water fluoridation. The clear majority (85%) support fluoridation, with many citing it as one of the top 10 public health innovations of the 20th century. The minority (15%) voiced concerns about the possible side effects of fluoride.

After researchers discovered that children in areas with naturally-occurring fluoride suffered fewer cavities, researchers recommended fluoridating community water supplies to reduce the number of dental cavities in a population in a simple and cost-effective manner. Community water supplies are commonly fluoridated in North America and Australia; approximately two-thirds of Americans receive fluoridated water, typically at levels of about 1 part per million (ppm). In Canada, about 40% of the population has fluoridated water; in Europe, the number plunges to 10%.

Lots of dentists had rave reviews for fluoridated water. "Best preventive measure in modern history," exclaimed one general dentist. "All areas should be fluoridated," opined an Illinois pediatric dentist. "There is a reason it was rated one of the top ten health policies of the century," commented a New York orthodontist. "Water fluoridation is the most effective low risk and low cost method of reducing dental decay rates for children in any size community," said one Illinois dentist.

However, some health advocates are not convinced that fluoridation is worth the risks. It's widely accepted that too much fluoride can lead to fluorosis, a condition characterized by brown stains on teeth. But some point to more serious possibilities, linking fluoride to health problems such as bone cancer, kidney and liver problems, and reduced IQ.

To many dental health practitioners, the risks of side effects aren't worth it. "Fluoride in excess is linked to several health problems," cautioned a Florida prosthodontist. "It is unnecessary and is downright dangerous to the health of the general population," said a New York dentist. "I have seen the China data on crippling fluorosis and understand that higher concentrations of fluoride in the water supply can be very dangerous," worried one Michigan dentist. "In light of research showing a 5-7 fold increase in osteosarcoma in boys exposed to community water fluoridation, it is almost criminal to support fluoridation," said a Florida dentist.

To some, fluoride is a matter of public health. "It is the best thing that we as dentists can do for our communities, our patients and our profession. Prevention is the key to eliminating dental decay and it is one of the few activities that may do something to address the access problem in this country. How can any dentist be opposed to it?" wondered a Maine orthodontist.

Some pointed to anecdotal evidence in support of fluoride. "I have had a practice in a small city for 25 years that does not have water fluoridation," commented a New Jersey dentist. "This location is surrounded by many towns that are fluoridated. There is a drastically higher level of caries (cavities) in children of the non-fluoridated city than the surrounding towns."

Opponents are also concerned about the social implications of involuntary mass medication. "It is forced medication of questionable benefit, and its source is chemical waste from fertilizer processing plants....eeeeeehh!" exclaimed a Washington dentist. "There is evidence that fluoride in the water may not be as effective as we have been led to believe," commented another dentist. "I do not like the idea of forcing fluoridated water on people. If you want to add fluoride to people's diets, there are other ways to accomplish this without adding it to our drinking source."

A number of dentists feel that fluoride is best used topically. "The toxic side effects of ingesting fluoride outweigh the benefits," said one general dentist. "I can accept topical use only. The fluoride they put in your water comes as a byproduct of the aluminum industry, and it is so toxic that it can only be put in special landfills or your local water supply... Makes you wonder."

There are any number of reasons why some are suspicious of fluoride. One Michigan dentist echoed the worries of others when he said, "I believe in it, but am concerned that there may be problems that are being suppressed by the government." A California orthodontist expressed frustration with this attitude, saying, "Fluoride has 60 years of proven efficacy. While initially compelling, anti-fluoridation sentiment is belief-based and highly emotional. Hard, scientific, evidence based research supports fluoride. Dentists need to educate themselves on this subject as they are a trusted resource to their patients and community."

"Just ask dentists - it's clear that fluoride is the best thing ever - unless, of course, it's the worst thing ever," said Jim Du Molin, dental consultant and founder of The Wealthy Dentist. "It's been controversial since it was introduced some sixty years ago, and the debate is still raging. Every week, the news holds a story of one community that's decided to fluoridate their water, and another story about a community that's decided to cease water fluoridation. Nonetheless, 85% of dentists still think it's a good idea."

For additional information on this and other Wealthy Dentist surveys in the areas of dental implants, cosmetic dentistry, sedation dentistry, and dentures, as well as more dentists' comments, visit www.thewealthydentist.com/surveys.htm.

The Wealthy Dentist is a dental marketing and dental practice management resource featuring dental consulting expert Jim Du Molin. The site’s weekly dental surveys and newsletters are viewed by thousands of dentists across the United States and Canada. The Wealthy Dentist is a sister company of the Internet Dental Alliance. IDA is the largest provider of internet dental marketing campaigns, dental websites, email newsletters and online find a dentist directories in North America.