Go to Girl in Hollywood for Boxing - Never Too Pretty

Cary Williams, a former fighter and Olympic level coach, is an expert in boxing and is gaining popularity in the entertainment world as the female boxing coach to go to for television and movies. Cary is no stranger to the camera; appearing on Fear Factor, Million Dollar Listings and other upcoming projects airing during sweeps in February. 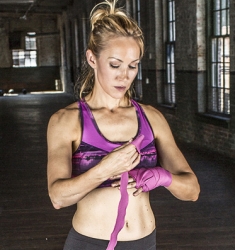 With the release of more boxing inspired movies and the popularity of women in mixed martial arts, the new workout women are trending toward is boxing. A real boxing workout creates strength mentally and physically and with proper technique comes that fabulous physique.

So what does a woman who has been on the cover of fitness magazines know about boxing? Check out her media coverage here.

Cary is no stranger to the world of boxing being a fighter herself, an Olympic level boxing coach as well as a boxing promoter in California.

She just wrapped up shooting a segment with a popular television show as a boxing expert.

Cary also recently trained Kelly Hu known for her roles in XMen, Scorpion King and The Doors just to name a few. Kelly was looking for a boxing coach that could really teach her boxing for a lead role she has starring Tom Arnold. She needed someone to help her look like a real boxer with proper technique and boxing moves.

With a cover model look, it is sometimes challenging for her to be taken seriously as a professional boxing coach. But once clients start working with her, they soon see that her skills as a coach, former fighter and attention to detail make her the complete package.

To further support and empower young girls and women, Cary created the brand Too Pretty for females in sports and industries dominated by men. The first tag line included Never Too Pretty To Hit Like A Boy, Lift Like A Boy and Shred Like A Boy with new lines including Too Pretty? NEVER! and Never Too Pretty To Be A Boss which was worn by Jazmyn Simon of Ballers. All lines encompass the idea that girls can do what boys do and still be feminine.

“I created this brand because I was told that I boxed like a boy. It was the best compliment I ever received.” Williams has worked with hundreds of young girls teaching them boxing, but the biggest lessons they have learned from her is that they can be strong and feminine at the same time.

Cary Williams is a former world-class boxer, Olympic Level boxing coach, cover model, philanthropist, writer and fitness expert based in Santa Monica California. She has been recognized by The California Legislature and several other women in sports for her contribution and impact on girls’ sports.
Contact
Too Pretty
Cary Williams
916 396 8866
www.tooprettybrand.com