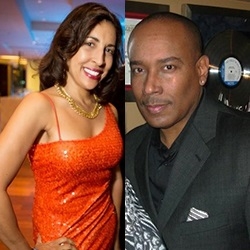 What about the average man or woman in society who has no desire to be involved in the adult film industry, but these same men and women do maintain an enthusiastic desire to engage in promiscuous and/or polyamorous sexual activities with members of the opposite sex or members of their own gender?

So, if you are a man or woman who is very much interested in maintaining a sexual relationship with two or more short-term partners or long-term companions, how would you be able to feel 'safe' about the men and/or women you choose to be intimate with?

Enter XOXY.com, the brainchild of the CEO and Founder, Jo Lynn Clemens. When Clemens' daughter first left for college, her mother - a self-proclaimed over-protective 'helicopter mom' - felt concerned about her daughter beginning to date away from home, given that no less than one out of every four women on college campuses has been the victim of at least one incident of sexual assault or date-rape. Ms. Clemens, who previously worked in the world of insurance regulation and risk management, launched XOXY.com in January 2015.

In addition to Ms. Clemens' concern about her daughter potentially being assaulted by a new male acquaintance, she was also very concerned about the sexual health of her daughter's potential suitors. Ms. Clemens' concerns are warranted, because statistics show that over 50 million men in the U.S. have tested positive for a sexually transmitted disease (STD) in this century. Also, in the last 15 years, almost 60 million women in the U.S. have also tested positive for some sort of STD, with gonorrhea being the leading STD among those infected.

When a man or woman chooses to become XOXY.com 'certified,' their profile on the company's website will show that they have consented to having a criminal background check conducted on them, as well as they have consented to have themselves tested for any and all STDs. For those men and women whose criminal background produces questionable results and/or their STD blood work produces a positive test for an STD infection, the company's website will not list such information on the website.

The XOXY.com website lets potential members know that if anyone happens to fail the XOXY.com certification process, no one in the general public will ever know that they even attempted to become XOXY certified unless they choose to share that information with a friend or acquaintance themselves.

The cost for XOXY.com's services are $139.00 for a six-month certification, or $23.95 per month. Each member's certification must be renewed every six months.

Book Author and Men's Dating Coach, Alan Roger Currie, recently interviewed Ms. Clemens on his talk radio podcast program, "Upfront & Straightforward," and he firmly believes the services that are offered by XOXY.com will be the wave of the future for those interested in any form of polyamorous and/or promiscuous dating.

Currie added, "I believe five years from now and later, whenever a single man or woman is interested in engaging in one or more episodes of short-term and/or non-monogamous sex with someone, one of the first things they will ask is, 'Are you XOXY certified?' I believe that will be part of all conversations between dating singles in their first or second meeting with each other. I mean, any man or woman could choose to sleep with someone who may not be XOXY certified, but the million dollar question is, why would anyone want to?"

To find out more about Jo Lynn Clemens and her company, visit https://www.xoxy.com/company/#team_sec

By reading this, you can receive a special $15.00 discount on XOXY.com's services by using the Promotional Code "DATING" when you sign up for a new XOXY.com certification membership. Please visit: https://www.xoxy.com/how-it-works/
Contact
Mode One Multimedia, Inc.
Alan Roger Currie
1-219-789-1948
http://www.modeone.net/training/
Ms. Adrienne Yates (Publicist): 1-614-975-5690