The William Meredith Foundation invites writers, reporters, and press advocates to celebrate the 2016 William Meredith Award for Poetry presented to Gray Jacobik, who James Tate has called “a rare poet, one not to be missed,” and who is compared to Moore, Bishop and Wallace Stevens.” The award carries a modest cash award along with the publication of a new and selected collection titled, THE BANQUET, scheduled for publication during National Poetry Month in April, 2016 by Poets’ Choice. 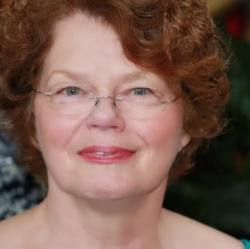 Uncasville, CT, January 07, 2016 --(PR.com)-- The William Meredith Foundation invites writers, reporters, and press advocates to celebrate the 2016 William Meredith Award for Poetry presented to Gray Jacobik. The award has no application process, but comes to the author unsolicited in the spirit of generosity that informed William’s interactions with the world of poetry when he judged competitions and supported new talent. It carries a modest cash award along with the publication of her new and selected collection of poetry, THE BANQUET, by Poets Choice Publishing. The official launch of this collection will take place at 4:00 on April 22 at the Shain Library at Connecticut College. Ms. Jacobik will also be reading from THE BANQUET at a number of venues in Connecticut, Washington, D.C. and Massachusetts, during National Poetry Month.

James Tate has described Ms. Jacobik as a “rare poet, one not to be missed,” and Dick Allen praises, “A lucid poetry, filled with crafted, amazing work. Wallace Stevens walks with her.” Another critic, Marilyn Chin calls the poems, “solid, well-built, masterful.... Jacobik’s love of detail recalls the best of Moore and Bishop, but with a sensuality that is fresh and contemporary.”

This award is being announced on the 97th anniversary of Mr. Meredith's birth. Previous awardees have included David Fisher, Lyubomir Levchev, US Poet Laureate, Natasha Trethewey and Andrew Oerke.

Gray Jacobik, a professor emeritus, is a poet, mentor, and painter who lives in Deep River, Connecticut. Her poems have appeared in numerous literary journals and anthologies including Best American Poetry, American Poetry Now, The Autumn House Anthology of Contemporary American Poetry, Poets Guide to the Birds, and Poetry from Paradise Valley. Among other honors, she has received The Yeats Prize, The Emily Dickinson Prize, an NEA Fellowship, and served as the Frost Place Poet-in-Residence. Her poem, “The Skeptic’s Prayer,” received the 2009 Third Coast Poetry Prize (Western Michigan University), and in 2010 “Paris, 1970” was a finalist in Narrative Magazine’s Second Annual Poetry Contest. Her book, The Double Task, received The Juniper Prize and was nominated for The James Laughlin Award and The Poet’s Prize. The Surface of Last Scattering was selected by X. J. Kennedy as the winner of the X. J. Kennedy Poetry Prize. Brave Disguises received the AWP Poetry Series Award. Her most recent book, Little Boy Blue: A Memoir in Verse, is published by CavanKerry Press. Gray invites anyone interested in learning more about her work to visit her website: http://grayjacobik.com. Her blog, Come A Little Bit Closer Now Baby, is dedicated to the art of close reading and appears on the Michigan Quarterly Review’s website.
Contact
The William Meredith Foundation
Richard Hateis
860-961-5138
www.williammeredithfoundation.org 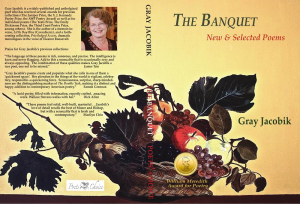 Book Cover for THE BANQUET, 2016 William Meredith Award for Poetry