Concept Design Quest is a Book About Futuristic Vehicles

This vehicle concept (not real) is a futuristic hovering car. This vehicle illustrates the idea of manipulating gravity in order to fly. This is the 2054 Phantom GT (Gravity Thruster). It is meant to be a prediction of a high speed sky car. 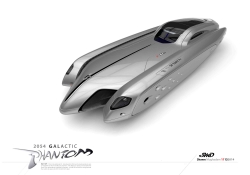 This Phantom GT is meant to be a race vehicle for the most Elite of customers of the future. This flying car should have an explosive Quad Gravity powerplant to move customers around the world very quickly.

This spaceship is one of a series of new futuristic vehicle designs coming out weekly until March 9th. At that time a Kickstarter campaign will launch to make a book.

This project started as an experiment on Facebook almost 3 years ago, where a set of sketches were posted for design direction feedback. The most "liked" sketch was then developed, refined, turned into a CAD model and eventually a 3D printed model. The best of these designs are being made into the "Concept Design Quest" book. If funded, you can be one of the first to get the book and take a look into the future of vehicle design, 3D printed models, have your name in the book, and 3 of the prizes will be a chance to have your own concept spaceship design.

Shawn Moghadam studied Transportation Design (B.S.) at Art Center College of Design in Pasadena. Shawn’s concept work in vehicle design includes some of the most familiar companies in the industry, from GM to BMW to Walt Disney Imagineering. Combining his traditional design skills with advanced futurism concepts and an entertainment design philosophy, Shawn also teaches vehicle design in the Los Angeles area and works as a Digital Designer for a major car company in Los Angeles. As a child he was fascinated with cars and spaceships, after winning a Motor Trend design contest in 2000, he decided to pursue a design career. This is a high speed flying gravity car