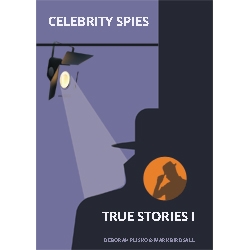 Leeds, United Kingdom, May 11, 2016 --(PR.com)-- Eye Spy Publishing Ltd, has released the first e-book in a new series featuring true stories about "real-life" spies. "Celebrity Spies" covers forty-three professions and industries whose famous members "spied for the side" and include fascinating trivia and hundreds of images. Book 1, Hollywood Actors, features over 50 celebrities.

Cary Grant was a spy hunter.

Frank Sinatra lent the CIA his jet for rendition flights.

Lucky Luciano, head of the mafia crime family, worked with the CIA.

The US Secret Service and hired Harry Houdini to train agents in escapology.

Walt Disney became an undercover spy for the FBI.

The brother of the Dalai Lama worked for the CIA?

"We are excited about the new series and although a departure from the sobering material in Eye Spy Intelligence Magazine, we hope our readers will enjoy it."
- Mark Birdsall / Managing Editor