Meet Award-Winning Actor and Martial Artist Ernie Reyes, Jr. in Oregon on May 21 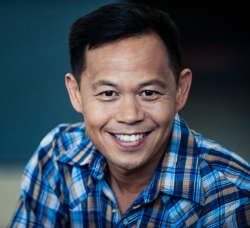 Portland, OR, May 20, 2016 --(PR.com)-- The public is invited to meet award-winning actor and martial arts champion Ernie Reyes, Jr. at a Teenage Mutant Ninja Turtles-themed pizza party and autograph signing on Saturday, May 21 in Hillsboro, Oregon.

The public is invited to meet Ernie at the May 21st event with two ticket options available:

VIP tickets ($50 per person) include preferred status for admittance to the event, an opportunity to meet and interact with Reyes, a photo opportunity and signed 8x10, pizza and beverages, and a month of free training at Ernie Reyes World Martial Arts.

General Admission tickets ($25 per person) include general admittance to the event, an opportunity to meet and interact with Reyes, pizza and beverages, and two weeks of free training at Ernie Reyes World Martial Arts.

For complete details and to purchase tickets, visit www.erniereyesevent.com. Space is limited and tickets are available while supplies last.

Credentialed media wishing to interview Ernie Reyes, Jr. during his stay in the Portland area or on the day of the event should contact Gwen Haney at 503-481-1867.

About Ernie Reyes, Jr.: Award-winning actor, martial artist and stuntman Ernie Reyes, Jr. celebrated his 30th year as an entertainer in 2015. A California native, he began appearing in television and movies as a child after a Hollywood agent spotted his talent while performing on his father’s martial arts demo team. Reyes Jr. quickly parlayed his skills and high likeability factor into numerous TV and film appearances, including his own television series for Walt Disney Studios. He has guest-starred on programs like Charmed, McGyver, and Highway to Heaven, and has appeared in dozens of movies including The Last Dragon, Red Sonja, Surf Ninjas, Rush Hour 2, The Rundown, and Indiana Jones and the Kingdom of the Crystal Skull. Reyes is recognized worldwide for his role as Keno in Teenage Mutant Ninja Turtles II: The Secret of the Ooze. He was also the stunt double for Donatello, the purple turtle, in the original Teenage Mutant Ninja Turtles movie. Recently, he guest-starred on two episodes of the top-rated CBS series NCIS: Los Angeles.