Eighteen-month project will allow investors to sell the full scope of individually-specified electricity products from the same solar facility to multiple off takers. 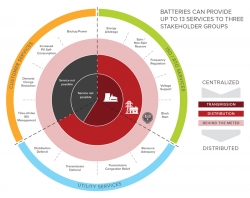 Hingham, MA, September 22, 2016 --(PR.com)-- Genbright, a distributed energy resources (DER) company based in Hingham, MA, is the recipient of an 18-month, $799,287 funding award from the U.S. Department of Energy’s SunShot Initiative. The award, announced last week to coincide with Solar Power International in Las Vegas, will allow Genbright to commercialize software solutions for actively managing distributed solar facilities as part of a portfolio of DER assets, including energy storage.

This first of its kind commercial platform will allow developers to extract the full potential of solar’s value stack. Each energy attribute will be specified as a product that can be bought and sold independently of other attributes to multiple off-takers. As an example, the commercial platform will make it possible for the owner of a single solar project to sell the optimal combination of energy, capacity and ancillary products to independent system operators; peak demand response to utilities; and load management, power quality and/or resiliency product to competitive end use customers.

The new platform will effectively “crack” the solar value stack, by pairing solar energy physically and/or virtually with other DER technologies that can do for solar energy what refineries have done for crude oil.

“This level of optimization of power assets has not been done before because our markets and regulatory systems were originally designed mainly around traditional wholesale generation, which produces fewer potential energy products than DERs because they do not typically add value downstream of the bulk transmission system,” said Joe Crespo, the founder and partner of Genbright. “New DER technologies will fundamentally change how our industry is organized and how solar off-take arrangements are structured.”

The project has the potential to revolutionize the economics of solar as dramatically as the discovery of the “cracking” and other refining processes revolutionized the economics of crude oil. Since the late nineteenth century, a barrel of crude oil has been refined into a number of useful products. The amounts of different products extracted depend on their relative economic values in the markets that the refineries can access.

By contrast, the economic value of a solar project is typically tied to the price of a single commodity like energy. Analogous to the refining of crude oil, solar projects combined with other DERs, including energy storage, can generate a value stack of more than a dozen potential products.

For example, the Rocky Mountain Institute has identified 13 services that can be provided by energy storage systems, including those co-located with solar. However, solar plus storage developers are currently limited in how they can sell these products. In particular, developers typically only sell certain services to one off-taker in one market segment – namely, end-use customers, distribution utilities or wholesale power pools. As a result, solar and other complementary distributed energy resources are being underutilized and undervalued. The key to realizing solar’s untapped potential is through active management and integration with DER portfolios in an expanded commercial platform such as the one Genbright is developing under the DOE’s SunShot Initiative.

The project will begin by helping to de-mystify access to the three key market segments for DER Original Equipment Manufacturers (OEMs) by building an open-source repository that specifies requirements to sell individually specified products to multiple off-takers from the same DER asset or portfolio of assets. Genbright will also partner with DER OEMS and software providers to make certain enhancements to DER management software and demonstrate its new commercial platform in a solar based portfolio of DERs.

Genbright provides commercial asset management services to owners of distributed energy infrastructure, including solar, demand response, energy storage, energy efficiency and other distributed generation distributed resources. Based in Hingham, MA, Genbright is comprised of a small group of energy market professionals with experience and successful track records in power trading, asset management and market optimization for several of the largest power producers in the U.S. Learn more at www.genbright.com.

About the SunShot Initiative

The U.S. Department of Energy SunShot Initiative is a collaborative national effort that aggressively drives innovation to make solar energy fully cost-competitive with traditional energy sources before the end of the decade. Through SunShot, the Energy Department supports efforts by private companies, universities, and national laboratories to drive down the cost of solar electricity to $0.06 per kilowatt-hour. Learn more at http://energy.gov/sunshot.
Contact
Genbright LLC
Joe Crespo
(781) 236-0825
http://www.genbright.com/

Eighteen-month project will allow investors to sell the full scope of individually-specified electricity products from the same solar facility to multiple off takers. 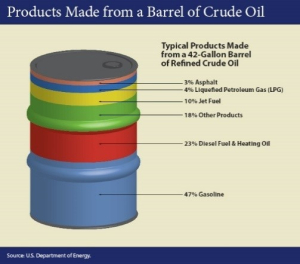 Products Made from A Barrel of Crude