SnooZeal, the Ground-Breaking Phone Controlled Anti-Snoring Device That Gives Your Tongue a Workout and Treats the Cause of Snoring/Sleep Apnea 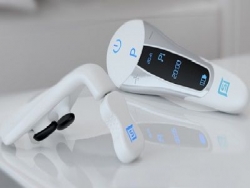 London, United Kingdom, December 16, 2016 --(PR.com)-- SnooZeal is the world’s first over the counter smart phone controlled anti-snoring/sleep apnoea medical device aimed at reversing the root cause of snoring and obstructive sleep apnoea. The app, used in conjunction with the device, works like a Fit Bit for snoring, keeping users on track and able to monitor improvement daily. SnooZeal’s novel technology sends gentle electronic pulses to the back of the tongue to tone the muscles which reverses the over-relaxation of the tongue and stops snoring.

What is ground breaking about SnooZeal is unlike other anti-snoring/sleep apnoea devices which are worn at night, the SnooZeal device is used during the day only and is worn for just 20-25 minutes, twice a day over a 6-week period.

Not only can snoring seriously disrupt sleep patterns of the snorer and their partner, it is often the precursor to Obstructive Sleep Apnoea. If untreated sleep apnoea can cause high blood pressure and put people at risk from stroke, recurrent heart attacks and abnormal heart beats.

Developed by a renowned ENT consultant Professor Anshul Sama, Senior Consultant Surgeon at Nottingham University, SnooZeal is a real breakthrough in treating rather than relieving snoring. Unlike other devices it addresses the root cause of excessive relaxation and loss of tongue muscle tone during sleep, which obstructs the breathing passage and leads to snoring and sleep apnoea.

Effectively giving the tongue a “work-out” it uses wireless technology to exercise the tongue to treat the physiological cause of snoring and sleep apnoea. The smart phone app monitors the user and controls the progress of the treatment.

Even though Sleep Apnoea is a serious health problem patients often stop wearing their night time sleep apparatus because they find it claustrophobic and uncomfortable, putting them at risk from serious health problems caused by Obstructive Sleep Apnoea. Because SnooZeal is only worn for 20 minutes during the day there is no need to wear cumbersome equipment at night which interferes with your sleep meaning a safer night’s sleep to those at risk.

“In the US alone, over 90m Americans snore every night, not only disturbing their sleep but that of their partners too. Noisy snoring strains relationships as it disrupts the partners sleep more than the snorers. It is well known that the long-term effects of sleep deprivation and disturbed sleep can lead to serious health problems,” says Professor Sama.

Since receiving CE approval earlier this month the team behind SnooZeal are working on European pre-sales with retailers, ENT Consultants, medical device distributors and sleep physicians. SnooZeal has a patent granted and has retained ISO13485, FDA approval is expected soon as European trial results are equally awaited and University College Hospital London is commencing trials in January and will be available over the counter in 2017.

“Many night time anti-snoring/sleep apnoea devices are often abandoned as people find them uncomfortable and ineffective. What makes SnooZeal so innovative and effective is that it addresses the root cause of snoring rather than just temporally relieving it, and because SnooZeal is only used during the day, it means that users can sleep naturally at night,” says Professor Sama.