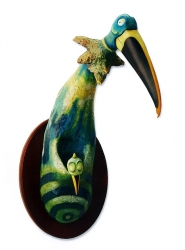 Stone Harbor, NJ, June 01, 2017 --(PR.com)-- For over 60 years, Dr. Seuss’s illustrations have brought a visual realization to his fantastic and imaginary worlds. However, his artistic talent went far beyond the printed page and yet, to this day, his Secret Art Collection is virtually unknown to the general public. Throughout his lifetime, Ted Geisel created paintings and sculpture which he secreted away at the Dr. Seuss Estate.

A compelling selection of artworks from The Art of Dr. Seuss will be on display at Ocean Galleries (9618 Third Avenue, Stone Harbor/609.368.7777) from Friday, June 16 through Monday, June 19, 2017. Visitors will view works from Dr. Seuss’s best-known children’s books, and explore The Secret Art of Dr Seuss, a mind-expanding collection based on decades of artwork that Dr. Seuss created at night for his own personal pleasure. Perhaps the wackiest and most wonderful elements of the collection are Dr. Seuss’s three-dimensional “Unorthodox Taxidermy” sculptures, with names like The Carbonic Walrus, The Two-Horned Drouberhannis, and the Goo-Goo-Eyed Tasmanian Wolghast, to name a few.

Ocean Galleries is one of the few galleries in the United States authorized to represent The Art of Dr. Seuss Collection. Gallery owner Kim Miller says, “We are proud to provide our community with a rare opportunity to view and learn about the artistic legacy of Theodor Seuss Geisel, one of the most significant American icons of our time.”

Artworks from this historic collection have traveled to museums and galleries across three continents since its inception in 1997, with works from The Art of Dr. Seuss now hanging in collections alongside the likes of Picasso, Chagall, Warhol, and other twentieth century Masters. Each of these estate-authorized limited editions have been adapted and reproduced from Theodor Seuss Geisel’s original drawings, paintings, or sculptures. Additionally, each work bears a posthumously printed or engraved Dr. Seuss signature, identifying the work as an authorized limited edition commissioned by the Dr. Seuss Estate.

Ted Geisel (aka Dr. Seuss) asked his wife, Audrey, to wait until he was gone before bringing these works to the public. Secretly, he wanted to be recognized as a serious artist, but publicly, he was quick to describe his private works as “Midnight Paintings.” In her preface to the popular coffee table book on this collection, The Cat Behind the Hat, Audrey Geisel writes, “I’m gratified to carry out Ted’s wishes and have these works revealed to the world.”

Amazingly, despite the unprecedented demand during his lifetime, no limited edition artworks were ever conceived, authorized, or created until this historic project began in 1997, six years after Geisel’s death. That year, Audrey Geisel commissioned this exclusive project and put into motion a series of artworks and exhibitions that would carry out her promise to Ted, while firmly establishing him as one of the most iconic talents of the twentieth century.

Join them for a fascinating look at the art and life of Theodor Seuss Geisel.

What: If I Ran the Zoo - The Art of Dr. Seuss Exhibition featuring known and unknown works from the life of Theodor Seuss Geisel. Artworks will be on exhibition and available for acquisition.

Theodor Seuss Geisel, a.k.a. Dr. Seuss, began his career as a little known editorial cartoonist in the 1920s. His intriguing perspective and fresh concepts ignited his career, and his work evolved quickly to deft illustrations, modeled sculpture, and sophisticated oil paintings of elaborate imagination.

Dr. Seuss is currently best known as one of the most beloved and bestselling children’s authors of all time, having written and illustrated classics such as The Cat in the Hat, Green Eggs and Ham, and How the Grinch Stole Christmas. Ted Geisel was also a political cartoonist for PM magazine during World War II, as well as a contributing illustrator for Vanity Fair and Life. He enjoyed a long, successful advertising career, had writing interests in three Academy Awards, received The Pulitzer Prize, a Peabody Award, and two Emmys.

His unique artistic vision emerged as the golden thread which linked every facet of his varied career, and his artwork became the platform from which he delivered 44 children’s books, over 400 World War II political cartoons, hundreds of advertisements, and countless editorials filled with wonderfully inventive animals, characters, and clever humor. Geisel single-handedly forged a new genre of art that falls somewhere between the Surrealist Movement of the early 20th century and the inspired nonsense of a child’s classroom doodles.

For more than 30 years, Ocean Galleries has provided quality art by contemporary artists to their clients while practicing the highest standards of credibility and integrity in a comfortable and unpretentious atmosphere. With locations in Stone Harbor and Avalon, New Jersey, the distinguished art galleries feature an ever-changing display of artwork that includes local artists’ watercolors, nationally recognized artists’ originals, popular beach prints, and limited editions. Ocean Galleries also carries fine furniture and hand-made crafts from America and around the world. Both locations have on-premises custom framing with design specialists and professional framers who can offer a wide selection of mouldings and an endless combination of traditional and custom-designed matting to complement and preserve any art. For more information, please call 609.368.7777 or visit www.oceangalleries.com
Contact
Ocean Galleries
Kim Miller
609.368.7777
www.oceangalleries.com
Julie Hayles, H2H Consulting, LLC