New York, NY, October 02, 2017 --(PR.com)-- Speaking about her new book, “Islamic Gender Apartheid: Exposing the Veiled War Against Women” from New English Review Press, Phyllis Chesler mourned the fact that so many American progressives, including feminists, have so disgracefully abandoned their Muslim and other tribal sisters who come to the West seeking the freedoms that European and American women enjoy.

“Unfortunately,” said Chesler, “Muslim women remain trapped in parallel, shame-and-honor tribal cultures both in the developing world and in countries where most women are free to leave home, marry or live with someone of their own choosing, obtain a higher education, leave or change their religion, work outside the home, etc. In the name of multi-cultural relativism and as presumed atonement for racism, feminists have been all too willing to sacrifice such rights on behalf of Muslim women.

“When young women are forced to veil, forced to marry against their will, have their genitals mutilated, are routinely subordinated, humiliated, or even ‘honor’ murdered by their own families, American feminists are tragically silent. This book documents what happens to Muslim women even here in the land of the free.”

Chesler issued a stern warning. “If American women do not vigorously oppose the gradually encroaching gender apartheid of Muslim women, little by little, they will lose their freedom too.

“If we allow forced separation of the sexes in public schools and municipal swimming pools, secret child marriages, polygamy and female genital mutilation—all in the name of religious freedom—our daughters will gradually become accustomed to the idea that they are less worthy than men.

“Rights for women, so hard won and still under siege, will eventually be lost unless American women stand up for the rights of all women—including Muslim, tribal, and other immigrant women. We simply cannot allow our precious liberties to be sacrificed on the altar of multi-cultural diversity.” 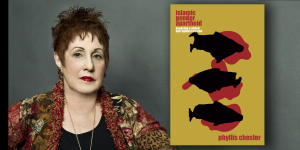