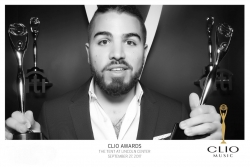 New York, NY, October 03, 2017 --(PR.com)-- At the 58th CLIO Awards ceremony on Wednesday night in New York City, Songwriter/Producer Alë Jay took home 2 CLIO Awards including a coveted Gold Award in Music for his original song created for a campaign against text and driving. The piece was also awarded a Bronze Award in the Streaming & Downloadable Content Category.

Impressed by his prior work, versatility, and the powerful soulfulness necessary to make an immediate impact, Omnicom Group’s Dallas-based branch selected Alë Jay as the emerging artist to partner with for this campaign. “We thank Alë Jay for believing in the project and taking it to another level,” said Abe García, Creative Director of the campaign.

Alë Jay created and performed the original song "Put It Down" which incorporates nine text messages that were being written at the exact moment of fatal texting and driving crashes. The song was hosted on Soundcloud where people could follow the victim's text messages in real time and learn about their stories. Additionally the ad was placed as an emerging song and played on major radio stations persuading drivers to “Put It Down” at the exact moment they exhibit the behavior.

Alë Jay is a young New York City-based artist hailing from the acclaimed University of North Texas Music Program. He is constantly performing in the city both as a leader and featuring/collaborating creatively in different capacities with various groups. This CLIO Award came to close a string of creative recognition for this piece that included being shortlisted for two Cannes Lions earlier this summer at the Cannes Lion International Festival of Creativity. “Having the opportunity to be a part of this project was truly amazing,” said Alë Jay. “Being able to contribute to such an important message through this song was an honor, and by telling the real personal stories of these victims we helped bring the message home for listeners.”

The CLIO Awards is the esteemed international awards competition for the creative business. Founded in 1959, The CLIO Awards are an annual award program to recognize the work, the agencies and the talent that push boundaries and establish new precedent. 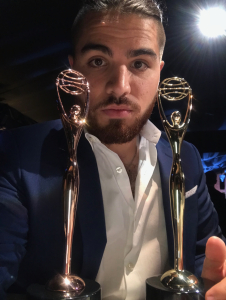 Ale Jay with both Gold and Bronze Clio Awards