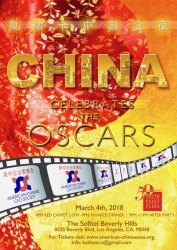 The ACCS, an esteemed business networking organization headquartered in Los Angeles, Shanghai and Beijing, is dedicated to connecting US and Chinese business leaders to help foster international business deals, investments and trade. They have worked for years to promote valuable economic exchanges between the US and China, and to foster trust and enhanced communication between their many members from different nations.

To better serve their members in the entertainment industry and promote international film and television co-production, the ACCS China Oscar Night Gala will bring together US and Chinese dignitaries, film industry professionals, Hollywood celebrities and VIP’s for an extravaganza of sight, sound, and high society.

Highlights of the sumptuous dinner will include: ACCS awards, a high fashion runway show, gifted Chinese performers, talented American musicians, and a fun, DJ dance after-party to cap off this special event.

An informative film co-production panel discussion and script pitch fest will take place earlier in the day to promote US-China co-productions, with a cash award to the winning pitch.

The evening will be sponsored in part by American Airlines and high-end retailer, South Coast Plaza.