The celebration of African participation in the 2018 FEI World Equestrian Games has been extended to a second day. A day of targeted activities has been added for Monday, September 17th in the Town of Tryon (North Carolina) - culminating with an evening of musical entertainment at the Rogers Park Amphitheater. Scheduled performers include Drea d'Nur, The Lemira Percussion Ensemble and Katrina "Kat" Williams. Beneficiaries include: Africare and the Focus on Africa Program at Merrill College. 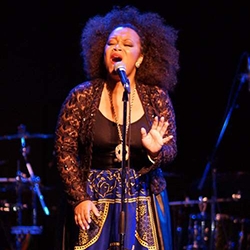 Rutherfordton, NC, August 29, 2018 --(PR.com)-- The celebration of African participation in the 2018 Fédération Equestre Internationale (FEI) World Equestrian Games (WEG) has been extended to a second day - due to popular demand.

As previously announced, a cocktail reception celebrating the participation of horses, riders, coaches and supporters from Africa in the 2018 WEG will be held on Sunday Evening, September 16th at Harambee Farm in the Green Creek Township of North Carolina’s Polk County. The location is proximate to the Tryon International Equestrian Center (TIEC) – site of the 2018 FEI World Equestrian Games.

The celebration honors contributions to equestrian knowledge, history, sport and tradition made by residents of African nations - as well as by persons of African heritage living in Europe, Asia, the Americas and throughout the world.

With the assistance of the Nina Simone Project, the Tryon International Film Festival and the Tryon Downtown Development Association leaderships, a day of targeted activities has been added for Monday, September 17th in the Town of Tryon - culminating with an evening of musical entertainment at the Rogers Park Amphitheater, 13.4 miles from the TIEC.

Taking advantage of the scheduled break in WEG competition, visitors from throughout the world are encouraged to spend the day in Tryon – exploring the town’s many boutiques, restaurants, art galleries, houses of worship, museums and libraries.

Headlining the 7:00 p.m. concert at Rogers Park will be the popular independent recording artist, singer and composer Drea d’Nur. Ms. d’Nur has received national and international acclaim for work highlighting the rich history of African-American music and art.

Other artists scheduled to perform include The Lemira Percussion Ensemble (of Sumter, South Carolina) and Katrina "Kat" Williams (an America's Got Talent finalist).

Among the guests honored throughout the two days of celebration will be a delegation representing the African Confederation of Equestrian Sports (ACES) - one of five continental associations recognized by the Fédération Equestre Internationale (FEI). National Federations governing equestrian sport in twenty (20) African nations are currently members of the FEI and ACES.

The event will be produced by SportsQuest International, LLC and will benefit Africa focused charitable and educational institutions including Africare and the Focus on Africa (FOA) program at Merrill College – one of ten residential colleges at the University of California, Santa Cruz (UCSC). Funds raised for Merrill College during the FEI World Equestrian Games will support students requiring financial assistance for travel to and from Africa during the 2018/2019 academic year.

Those seeking sponsorship details are asked to address an email inquiry to: marketing@SportsQuestInternational.com.

The Fédération Equestre Internationale is the international governing body of equestrian sport. The FEI headquarters are in Lausanne, Switzerland.

The African Confederation of Equestrian Sports is one of five continental associations recognized by the Fédération Equestre Internationale.

The FEI World Equestrian GamesTM are the major international championships for equestrian sport, and are administered by the Fédération Equestre Internationale (FEI). Featuring world championships in eight (8) equestrian disciplines - Jumping, Dressage and Para-Equestrian Dressage, Eventing, Driving, Endurance, Vaulting and Reining - the games have been held every four years (in the middle of the Olympic cycle) since 1990. The 2018 WEG has the potential to be the largest sporting event ever staged in North Carolina - with over $400 million U.S. Dollars of projected economic impact and 500,000 spectators from 70 countries and all 50 states over its thirteen day run.

Africare is a leading non-governmental organization (NGO) committed to addressing African development and policy issues by working in partnership with African people to build sustainable, healthy and productive communities.

The Nina Simone Project exists to honor the remarkable life and legacy of a native Tryon, North Carolina daughter, who achieved international recognition for her unique talent and her formidable contribution to the musical arts. Born in Tryon, Eunice Waymon (February 21, 1933 - April 21, 2003) achieved worldwide fame as the recording artist and human rights icon Nina Simone – The High Priestess of Soul.

A working model in Experiential Education, the Focus on Africa series at UCSC’s Merrill College has a dual emphasis: a) upon current affairs on the African continent, and b) on specific methodologies that participating students can use in building viable constituencies for Africa - on campus and in their home communities. Areas of specific focus include: Public Health, Media, Technology and Education, Energy and Transportation.

The Tryon International Film Festival - With almost 100 films projecting in six separate venues over two and a half days (October 5 – 7, 2018), the town of Tryon will be treated to a broad spectrum of film art and filmmakers from around the world. Patrons will enjoy educational breakout sessions, festival merchandise, cocktail parties, and so much more.

The Tryon Downtown Development Association - TDDA, in partnership with local business owners, individual members and the Town of Tryon, strives to enhance retail and commercial opportunities in a pedestrian-friendly environment, and to promote economic development via innovative thinking, creative promotion and a celebratory attitude about that which makes our community unique and Nearly Perfect. Always Tryon.

Brown Paper Tickets, the Not-Just-for-Profit ticketing company, has disrupted the ticketing industry for over a decade, offering socially-conscious event ticketing and management tools that include “pay it forward” donations made to social causes with every purchase, producer payment policies, community engagement programs and free services, designed to “give more.” The world’s first free online event registration and ticketing company, the Seattle, Washington (USA) based service has been used by 10 million + ticket buyers in 27 countries since its founding in 2000.