Ten years after a grim, life altering medical diagnosis threatened to derail her artistry and dreams, the award winning independent pop-folk singer, songwriter, artist, playwright and author Lisa Sniderman, aka Aoede, offers a path towards hope, healing and joy within the struggles with her new inspirational memoir, "A Light in the Darkness: Transcending Chronic Illness through the Power of Art and Attitude." Aoede leads an online community of more than 150 artists who are creating to heal. 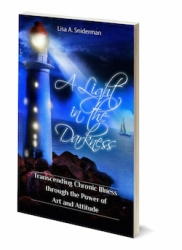 San Francisco, CA, October 05, 2018 --(PR.com)-- When Lisa Sniderman first performed under her stage and future recording persona Aoede (after Greek Mythology’s “first muse of song”) back in 2006, she had no idea just how far her journey of being a muse and inspiring the world would take her.

Ten years after a grim, life altering medical diagnosis threatened to derail her artistry and dreams, the award winning independent pop-folk singer, songwriter, artist, playwright and author offers a path towards hope, healing and joy within the struggles with her new inspirational memoir, "A Light in the Darkness: Transcending Chronic Illness through the Power of Art and Attitude" (Sep 21, 2018 Crimson Cloak Publishing).

A quirky, colorful artist and performer whose vibrant imagination transcends creative boundaries, Lisa is the visionary behind many fantastical fictional realms that have captured the imagination of the Bay Area’s musical theater scene - and made her a beloved, multiple award winning artist in the worlds of folk and children’s music. Since the release of "Affair with the Muse" in 2011, her recordings – including her three musical story audiobooks "Is Love A Fairy Tale?," "What Are Dreams Made Of?" and "Do You Believe in Magic?" - have earned her a shelf full of accolades. She has received more than 50 awards since 2012 for her songwriting, audiobooks and stage plays, including Independent Music Awards Vox Pop Winner 2014; International Songwriting Competition 2013, 2012 Winner; and the John Lennon Songwriting Contest 2013, 2012 finalist.

While doing all she could to keep her creative light shining to the fullest, Lisa behind the scenes was struggling with Dermatomyositis (DM), a rare and debilitating chronic inflammatory disease marked by muscle weakness and a distinctive skin rash. Lisa says, “If I had a crystal ball during rehab, I would have seen that in a few short years, I’d have released five albums, been considered for Grammy Awards, become a playwright, written and recorded three fantasy musicals (and staged two), been honored with more than 50 awards for my songwriting, audiobooks and stage plays, and would have written my memoir, all while living with a chronic illness and disability.” In the early chapters of "A Light in the Darkness," Lisa holds nothing back, chronicling her painful hospital stays, brutal treatment regimen and the seeming crash of all her creative dreams as she battled to maintain a normal life with a body bent on revolt.

The chapter titles reveal the wondrous arc of her journey as she overcame life’s darkest fears, began to reluctantly accept, then embrace, her “new normal,” and learned to understand her illness as a gift in disguise which has opened the door to new dreams, new songs, new opportunities and a legacy to pay forward. Chapters include: Redefining Success, Facing Your Fears, Following Your Bliss, Putting Yourself Out There, Surrounding Yourself with Cheerleaders, Finding Positive Role Models, Celebrating Your Abundance, Keeping Your Dreams Alive and, reflecting the work’s ultimate mission, Being a Light in the Darkness. Says Lisa, “I’m discovering that the most important way I can continue to be a light is to offer my story so that you are inspired to bring to light and share your story.”

Richly detailed and emotionally raw and compelling, Lisa’s story is a light in the darkness for anyone who struggles with a chronic condition or knows someone who battles illness, disability or unexpected life events - and those who seek fresh inspiration, assistance and encouragement, hope, possibilities and reasons not to give up. It’s particularly relevant to her fellow creative souls who seek joy and healing from their creativity. Her insights and reflections on her journey inspire hope and the courage to keep dreaming and living to the fullest no matter what life may hurl at you.

Earlier in 2018, Lisa, gearing up for the release of her book, launched and leads a unique Facebook community of more than 150 like-minded artists and souls also creating to heal called "Lights in the Darkness: Artists, Authors, Musicians Creating to Heal." Lisa is collaborating with more than 50 other artists, musicians and authors and will share her and their stories and art focused on the art of healing, during her live/streaming multimedia “Creating to Heal” event in December, including a live performance on December 16th at Dragon Theatre in Redwood City, California and an online showcase of video interviews. Lisa says, “My story is persevering through this darkness called dermatomyositis through the creative process. Music and art are my lifelines and I cannot stop creating. But creating and expressing, donning my ‘Aoede’ artist hat, doesn’t go far enough. I’ve discovered a yearning to be part of something bigger than myself, and that helping ourselves and others heal who may be battling something similar requires us to be vulnerable and takes the support of amazing people, all of whom have something powerful to contribute and inspiring, life changing stories that need to be heard.”

To learn more about "A Light in the Darkness" book visit:
https://alightinthedarkness.info

For more information on Lisa Sniderman and Aoede visit:
https://alightinthedarkness.info/media

For more about lights in the darkness community and collaboration visit:
Facebook Group: Lights in the Darkness-Creating to Heal
Contact
Aoede
Lisa Sniderman
415-779-5641
https://alightinthedarkness.info

Praise For A Light In The Darkness

Endorsements and Testimonials for Lisa Sniderman's "A Light in the Darkness" book.