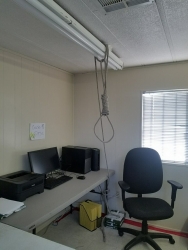 San Bernardino, CA, December 19, 2018 --(PR.com)-- Latest update concerning the Colby Dorman v. Giant Inland Empire R.V. Center Inc. and Jay Bensiek Lawsuit. The lawsuit alleges: In 2017, an employee arrived to work at the RVIA Show at the Fairplex in Pomona, California to find a noose hanging over his desk. He alleges that the noose had been hung by the company's Finance Manager and after complaining to management, the plaintiff was subjected to retaliation. Giant RV filed a motion to keep the case out of court. The employee’s attorneys are fighting the motion.

Parties in the lawsuit have yet to receive a ruling on Defendant’s motion to compel arbitration. The Honorable Bryan Foster stated that the matter is “under submission.” The parties expect a ruling later this week.

On August 28, 2018, Colby Dorman filed suit in San Bernardino Superior Court against Giant Inland Empire R.V. and Jay Bensiek. Dorman, a former employee, alleges he discovered a noose hanging over his desk when he arrived to work at the 2017 at the RVIA Show at the Fairplex in Pomona. Dorman alleges that he was subjected to retaliation after reporting the incident. [Exhibit 1 attached: A picture of the noose.]

Hull, a vocal opponent of forced arbitration in employment cases, commented: “Companies use arbitration to try and keep cases like this one from the public eye. We are hopeful that California’s legislature will correct the problem.”
Contact
Law Offices of Ann A. Hull, Inc.
Pat Miller
818-992-2924
www.annhull.com