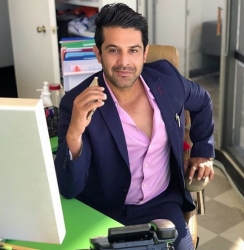 Beverly Hills, CA, May 15, 2019 --(PR.com)-- In America, the reality that our greatest desires can be achieved with resilience and perseverance is an educated mantra we learn as children. We go to our schools, learn our multiplication tables, and are raised to believe that we live in an equal-opportunity nation - the Land of the Free and Home of the Brave, as it were. That with dedication and hard work we can achieve any goal, have any career, and create a beautiful reality that will carry us into old age.

For hundreds of thousands of immigrants, however; this is an all-too-often unattainable dream which requires a degree of perseverance that many born in America may never understand. An immigrant pursuing the American Dream is not a new narrative, but the individual stories of the men and women who come to this country to create better lives for themselves are among the most unique stories told today.

Johnny Beig, immigrant of Kashmir, India, entrepreneurial powerhouse, and co-founder of The Dioz Group and Alanic Athleticwear are re-defining what it means to be an immigrant business owner in America. He shows that growing up in a warzone does not translate to lifelong hardship when leveraged as a motivational tool and stepping stone toward a better life.

For Beig, success was not achieved overnight. His story begins in Kashmir where his police commissioner father offered an often too-close-for-comfort look at the true suffering that was occurring each day in his home town.

"My Dad was Police Commissioner, so he had a very good position," said Beig. "But obviously Kashmir has been associated with a lot of terrorism, so it was not the safest place for us. We had to move around a lot."

One of Beig’s earliest memories of living in a city overtaken by rebels was when he was 14 years old. His father was found unconscious with injuries to his legs, face, and neck, which would keep him confined to a hospital bed for weeks.

“My Dad’s security guards came to our home and said there was an attack on his squad car. He tried to diffuse a situation, and someone threw a bomb in his direction,” he said.

Though his father survived, the lasting impact this moment had on his family was motivation enough to seek a better, safer life away from Kashmir. Two years later, Beig’s father and mother moved him and his siblings to Melbourne, Australia. His father elected to stay behind in Kashmir, committed to keeping the peace in his ancestral home and providing for his family thousands of miles away.

“My Dad saw potential in us and he didn’t want us living in an environment where we couldn’t excel or reach that potential,” said Beig.

Upon arriving in Australia, Beig began working as an IT Manager while playing semi-pro cricket. While he was making good money, he quickly realized his passions lived outside of the IT world. He dreamt of creating a business that combined his greatest passions in life but would also provide an income like no one in his family had ever seen.

“I realized I wasn’t good enough as a professional sportsman, but I wanted to mix my passion for sports and making money with something I loved. As a result, I started to design uniforms for my own cricket team, he said. I started getting more orders from other local teams and today we now work with over 1,500 teams and 1000 Largest Sporting events worldwide.”

The early success of Alanic resulted in Beig moving his family to Beverly Hills, California, where he would open the newest Alanic and Dioz Group offices. The company was taking off, but not without a few bumps in the road.

"A few years ago I thought we were growing too fast," said Beig. "We went through a really hard time; I was feeling regretful, thinking I hired too many people or opened too many offices. It was one of the most stressful times of my life and I thought ‘Oh my God, this is the end.’"

The writing was on the wall and many people would have given up, but a special piece of advice he had been given at a young age kept Beig going.

"Everything happens for a reason," he said. "So, I never quit. I just keep going because success is always right around the corner. It hasn’t always been sunny and there have been times I was very close to giving up, but I remained persistent. I had to keep believing in myself and the company; believing in what we were doing."

Today, Alanic has grown and expanded into an international and impregnable fortress of athletic wear. With offices in Los Angeles, Tampa, Sydney, London, Shanghai, New Delhi, and Mexico City, with almost 120 staff worldwide, and the brand spans across multiple time zones, which Beig and his team credit as the driving force behind their impeccable customer service.

"My phone is always on me," said Andrew Thorne, Business Development Manager at Alanic. "Since many of our factories are located on the other side of the world we never really stop working. Our customers come to us and get answers instantly. Our reception is covered 24/7."

In its short history, Alanic has partnered with hundreds of major marathons around the world, including: Tough Mudder, the San Francisco Marathon, Honolulu Marathon, Seattle Marathon, The Great Ethiopian Run and Beirut Marathon in Middle East and Africa and many more.

Additionally, Marshawn Lynch's Beastmode brand and Justin Bieber's Drew House line have both partnered with Alanic for them to manufacture.

With their summer line launching in June 2019, Beig hopes this will provide customers with a new opportunity to see their innovations come to life.

"We have come up with new, trendy styles that are different from what you see in a Nike or Adidas store," said Beig. "This is an athleisure brand. If Alanic is only being worn in the gym, that's one confined space. We want customers wearing [Alanic] on a date or at the coffee shop."

Beig has experienced hardships that many of us will never understand ourselves, but he credits all of these experiences for the success of Alanic and remains grateful for all the ups and downs.

"If you can't stand back up, then you're done," said Beig. "How high you bounce back is what defines a champion. I wasn't born entrepreneurial, but as long as you learn from your mistakes and move forward, you're going to be okay."

Beig currently lives in Beverly Hills, California with his family and is also looked up to as a role model on social media to many young entrepreneurs who have big ambitions and dreams.

He sees it as a good way to engage with people and share his knowledge, passion and experience with all the followers and you can visit there website: https://www.alanic.com/
Contact
Alanic
Johnny Beig
1.855.525.2642
www.alanic.com