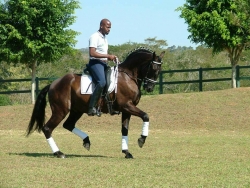 First presented in 2018 as a tribute to Africa based athletes competing in the FEI World Equestrian Games and to pioneering African-American horsemen (active pre-1975), the 2019 DOTAE gala will be staged as an adjunct to the CSI 5* (International Jumping Competition) scheduled for October 16 – 20 at the nearby Tryon International Equestrian Center (TIEC). The Tryon tournament will include qualifying classes for the 2020 Olympic Games in Tokyo (Japan).

Guests at the soirée will feast upon a variety of treats inspired by the cuisines of North Africa and the Americas – expertly prepared by chefs from the renowned Hare and Hound Pub of Landrum, SC.

Tickets for the 2nd Annual Day of the African Equestrian gala will go on sale on Monday, July 8th and be available on-line through Brown Paper Tickets.com.

Sponsorship information is available on-line at:

Proceeds from the 2018 Day of the African Equestrian benefited Africare and the Focus on Africa program at Merrill College (University of California, Santa Cruz).

DOTAE organizers have also unveiled long-range plans to stage the 2022 Day of the African Equestrian in Dakar, Senegal - during the IV Summer Youth Olympic Games (Dakar 2022). The games will be the first International Olympic Committee (IOC) event to be held on African soil.

“We welcome the opportunity to honor African equestrian excellence in a setting viewed by many as ‘West Africa’s Cultural Capital,'” says Pamela Glover-Cox, Secretary and Treasurer of ACREF. “With a comprehensive Culture and Education Programme (CEP) being a key component of the Youth Olympics, it will be our aim (and that of our partners) to bring the attention of the world – and in particular young people of color - to the many positive and inspiring role models in the equestrian world.”

“Dakar’s proximity to Gorée Island (the largest slave-trading center on the African coast from the 15th to the 19th century) holds a particular significance for African-Americans and others living in the Diaspora.”

The westernmost city on the African mainland (3,800 miles from New York), Dakar is the home to multiple national and regional banks as well as numerous international organizations.

The AFRICAN CONNECTIONS Research and Education Fund, Inc. (www.africanconnections.com) was created in direct response to the numerous distortions, half-truths and omissions seen almost daily in the popular media regarding Africa, her people and the African Diaspora.

The principal mission of the organization is to illuminate, to educate and to provide a balanced viewpoint that celebrates genuine achievement and service to humanity.

SportsQuest International, LLC (www.SportsQuestInternational.com) is a privately held multimedia production company specializing in the development and promotion of sports related programming that presents positive, informationally rich themes. The company is widely known for its coverage of national and international level equestrian events.