The company's move to a tech enable company is adorned with accolades, the quest for funding highlights the problems for female founders and women of color. Prompting a move to fund within our groups and #showthemwhoweare. 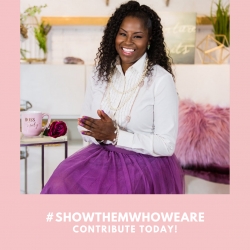 Houston, TX, August 13, 2019 --(PR.com)-- Kim Roxie, the founder of LAMIK Cosmetics, a clean cosmetics brand for women of color, is on a mission to combat the negative statistics related to Black women founders, with a crowdfunding campaign on iFundWomen.com that showcases the power of women with her initiative entitled #ShowThemWhoWeAre. She is seeking $30,000 to pivot her brand from its brick and mortar past to a high growth e-commerce startup.

"I started this crowdfunding campaign because I have been through five Accelerators, to multiple funding panels from Silicon Valley, to Austin to Boston, all across the country," she says. " I have interacted with investors, angel investors, venture capitalists, and although my network looks a whole lot better than it did 15 months ago, I also understand that even though it is still not easy to gain funding for a high growth tech startup." Roxie understands the realities associated with her decision. "When I looked at the statistics, 2.2% of women get venture capital, and Black women get only .002% of capital, that's the statistic. Well, that's a huge problem," she explains.

However, Roxie had an aha moment while at a seed funding Bootcamp for women held in Silicon Valley a few months back. When she looked around the room, she didn't see women who were having trouble raising money; she saw a roomful of power. "I thought about the women in my life, in my community, those who have supported my business all along. They are lawyers, judges, teachers, executives, entrepreneurs, and mothers," she says. "They are all powerful, and we need to show the world who we are! I wanted to use to harness that collective power to launch LAMIK 2.0. I wanted women from all over the world to join us as Pre-Seed contributors. I felt forced to pursue crowdfunding, but through this journey, I discovered that we are a force!"

Roxie discovered iFundWomen.com when a fellow female entrepreneur launched her campaign on the platform as was hooked and found herself returning to see what other campaigns she could support. When she started her campaign, she knew that she was in the right place. "When I understood the amount of coaching they give you as founder, I was amazed. I don't know of any other platform that gives you that kind of support," Roxie says. "I am excited about what is to come and I excited to be partnering with iFundWomen to do it."

For more details on the LAMIK crowdfunding campaign go to https://ifundwomen.com/projects/lamik-beauty-clean-cosmetics and follow #ShowThemWhoWeAre on social media.

LAMIK Beauty, Love and Makeup in Kindness, was created in 2004 to bring clean beauty products to women of color. LAMIK blazed the trail of clean beauty, natural organic and vegan ingredients far before it was trendy. In 2019, Roxie is launching LAMIK 2.0 a tech enabled e-commerce and subscription with it’s full range of color cosmetics with an array of new formulas. 2019 has been a year of accolades for LAMIK and Roxie. A Houston Native, Kim Roxie, a 2019 Houston Business Journal 40 under 40. Silicone Valley news named LAMIK one of the top 25 startups to watch! LAMIK is poised to become a staple of women everywhere.
Contact
LAMIK Beauty
Tauri Laws-Phillips
214-686-4052
lamikbeauty.com