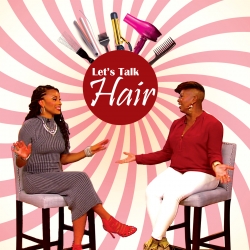 The journey to be seen

The move from pilot to festival winner to distribution is what amazes Gittens the most. “In the past, all a pilot could do was to be shopped around and pitched, and hope an executive would pick it up and take it to series,” she says. “But now, a show like 'Let’s Talk Hair' has a chance to get noticed in festivals then be released as a TV special, and build audience on a high profile platform alongside prestigious titles. I’m so excited to produce in an era where this is possible.”

The power of media

Gittens grew up with the idea that media has the power to bring people together and bring them closer to themselves. As a teen, she’d pour over the pages of Essence, inspired and motivated by the beauty outside, beauty inside message. She watched “Yo! MTV Raps” bring hip hop to the mainstream. When Gittens was working as a technical director for KSCI-TV in Los Angeles, shooting 4 to 5 shows a day, she loved the pace within a production studio.

And she understood the power of the format. "I asked myself, 'If I were to produce my own show in a TV studio, what would it be about?'" She thought to the people she cared about the most – her family. Her grandmother, who had been a beautician years before becoming nurse and later an administrator at Kings County Hospital in Brooklyn. Her cousin, who is a barber. Her sister, who developed a line of premium lace wigs. Hair seemed to be a common theme. She also considered her own needs around hair. "I wanted black women like myself to have a space where we could share our stories and also really talk about products and tips for caring for our hair. I realized that the kind of show I was looking for didn't exist yet. And so I created it."

"Let’s Talk Hair" takes the macro level trends – like the billions spent by African-Americans on hair products, issues like hair loss, and relaxed versus natural hair – and breaks them down into delicious bite size nuggets, like how much do we spend on our hair a month, or how a fashion editor got her hair to grow healthy again, or what it means to enter your child in a natural hair pageant for little girls.

If the show takes off and becomes a series, Gittens has big plans to cover all sorts of topics weekly through the lens of hair, and even include men’s grooming editions. “As much as our show is about hair, it’s not only about hair,” says Gittens. “We’ll get to explore subjects like travel, family, career, relationships, personal finance, style, business, life changes – hair is the beautiful thread that runs though all these other really interesting things.”

Rhavin "with a V" McSweaney is a UC San Diego graduate (BA in Communication) with broad experience in communication, PR, broadcast journalism, post production and social media. She has worked in front of the camera as a host and actress, and on the production teams for such shows as "American Ninja Warrior Jr." and "America’s Next Top Model."

"What I really love about our hosts is their wonderful personalities and their chemistry, as well as their passion for hair," says Gittens.