Javed Ahmed Ghamidi to Inaugurate His Institute in Dallas, Texas

Grand Opening of the Ghamidi Center of Islamic Learning on Oct. 12, 2019; Commencement of weekly lectures by Mr. Javed Ahmed Ghamidi; Register at: https://bit.ly/gcil-grand-opening 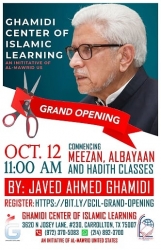 Carrollton, TX, October 09, 2019 --(PR.com)-- Renowned scholar of Islamic sciences, Javed Ahmed Ghamidi will be inaugurating Ghamidi Center of Islamic Learning in Carrolton, Texas on October 12, 2019, at 11:00 AM CT. Ghamidi Center of Islamic Learning, an initiative of Al-Mawrid United States, is an institute of Islamic sciences, located at 3620 N Josey Lane, Carrollton, TX 75007. He will also be commencing his weekly lecture sessions on the day afterward. The lectures will be broadcasted on from the facebook Facebook page of the center. To get live notifications, please like and follow the page at www.facebook.com/GhamidiCIL

Javed Ahmad Ghamidi, who started his academic journey in the early 70s in Lahore, Pakistan, founded his first institute of research and education, Al-Mawrid in 1983. Since its formation, Al-Mawrid has been playing a pivotal role in research, education, and dissemination of Islamic sciences based on teachings of Imam Hamid Uddin Farahi and Maulana Ameen Ahsan Islahi.

Javed Ahmed Ghamidi started getting the attention of masses in Pakistan due to his several appearances on television programs in the early 2000s and rapidly attracted the attention of intelligentsia because of his logical, convincing and yet controversial explanations of different aspects of religion, particularly Islam. He openly condemned radical and extremist religious factions and provided a counter-narrative rooted in the Quran against the narrative used by extremists and violent factions in the region. Due to his unrelenting and brave struggle against extremism and violence, he and his organization became a target of terrorists and had to rollback their activities in Pakistan. After the assassination of a couple of his close aides, Javed Ahmed Ghamidi went in self-exile in Malaysia in 2008.

Al-Mawrid United States (AMUS), the flag-bearer of Ghamidi's mission in the United States, was registered in 2014 as a Nonprofit 501(c)(3) charitable organization. Since then AMUS, benefiting from the space provided by freedom of speech in the U.S. has been at the forefront in the dissemination of his work on social media. AMUS arranged a countrywide tour of the learned scholar in 2015 and another one in 2017. During his last tour, AMUS was able to convince Mr. Ghamidi to move to the U.S. and help AMUS propagate the message through education.

Ghamidi Center of Islamic Learning (GCIL) located in the suburbs of Dallas, TX, is the first step towards the goal of establishing a first of its kind university of Islamic sciences, where Islam will be taught as a form of knowledge and not a creed. Open to students and truth-seekers of all religions, GCIL will create an environment of open discussions where students will be encouraged to question everything in quest of seeking the ultimate truth.

Several educational programs will be rolled out at GCIL, Including courses on Quran, Hadith, fundamentals of Islam, Islamic Jurisprudence, Arabic language, Theology, Philosophy, and Logic.

For more and info and stay connected please like our page: www.facebook.com/GhamidiCI or visit our sites: www.almawridus.org | www.Ghamidi.org

To attend the ceremony in person, please register at:
https://bit.ly/gcil-grand-opening
Contact
Al-Mawrid US
Farhan Saiyed
972-370-5083
www.ghamidi.org