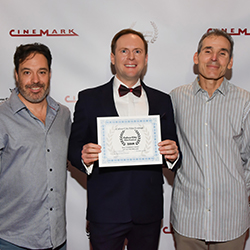 Los Angeles, CA, December 17, 2019 --(PR.com)-- As the prestigious annual 2019 Culver City Film Festival comes to an end, Arek Zasowski is celebrating yet another film festival victory with his short romantic drama “Let Go: The Prelude” in which he portrayed the lead character, archaeologist Henk, who, after losing his beloved fiancée Tiffany in a tragic accident, is struggling to recover and return to his day to day life.

“How do I feel? Fantastic and grateful to be honest,” says Arek Zasowski. “Thank you Jon Grusha and Peter Greene, the Culver City Film Festival executives, for the award. It is an honour to be recognised amongst so many other great independent films screened at the film festival. I am thrilled to see ‘Let Go: The Prelude’ being so successful,” adds Zasowski.

“I have always been drawn towards romantic comedies, romantic films and love stories in general, therefore winning Best Romance Short Award, at such a prestigious film festival at the heart of motion pictures and television productions, the film capital of the world, in Los Angeles is very special. It is an important annual film event as ‘Let Go: The Prelude’ was my very first short film that I have ever made so seeing it recognised by an independent film industry experts in Los Angeles is very encouraging and it is definitely motivating me to continue to develop and create more films,” says Zasowski. “It has been a wonderful film festival with a very diverse selection of independent films screened at high quality movie theatre in Los Angeles which makes it a fantastic platform for independent filmmakers to showcase their creative work to the wider audience as well as to other film industry professionals,” adds Zasowski.

“Let Go: The Prelude” is a touching short drama about love and longing. The film depicts the story of an adventurer archaeologist Henk, who, after losing his beloved fiancée Tiffany in a tragic accident, is struggling to recover and return to his day to day life. The film explores Henk’s emotional side and vulnerability, his deep love to Tiffany, and his great struggle as he tries to find an answer to a more broad question, how to cope after losing someone dear that he truly loves. Earlier this year, “Let Go: The Prelude” won Best Inspirational Short Award at the 2019 Silver State Film Festival in Las Vegas, NV.

“What is coming next in 2020? I will continue to build on the recent success, develop new projects and showcase our work at the film festivals around the world. Amongst the few new projects currently being in various phases of development, I am particularly excited about the part two of the ‘Let Go’ entitled ‘Let Go: Letting Go’ which, at this moment, is in post-production. It is planned to be released within the first two weeks in February 2020, ready for the Valentine’s Day,” says Arek Zasowski.

The story follows on from the part one - “Let Go: The Prelude.” Arek Zasowski, Viola Zasowska and Daniela Tanner will return as Henk, Tiffany and Anne. There will also be few new faces, American, English and European talent, including - Natasha Jules, Edwin Barandarou, Paul A. Taylor, Olga Malchevska, Pat Ceasar and Martin Thompson amongst other talent “so the next year is already looking very promising,” adds Zasowski.

“What is the one thing that I would say to encourage starting out actors and filmmakers? It is never too late to begin. If you wake up each day in the morning and all you can think of is to be in front of or behind the camera, find the courage, take risks and follow your dreams. At first you, may not exactly know all of the individual steps ahead of you but as long as you have a vision of what you would like to do or who you would like to become, and take an action, the individual steps will become more clear as you go along. Take initiative and you will find the way forward. It may take some time, but time will pass anyways, whether you do it or not, so why not to do what you love doing? If you have a story to tell, team up with other enthusiastic creative people in the industry and make it a reality,” says Zasowski. 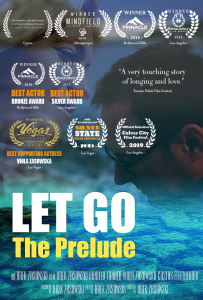