More dentists are moving away from silver fillings because of health and aesthetic concerns, finds a recent Wealthy Dentist survey. A number no longer offer amalgam, preferring composite restorations instead. 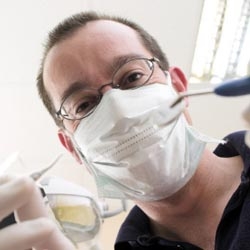 San Francisco, CA, April 20, 2008 --(PR.com)-- Dentists have used dental amalgam to make metal fillings for a long time, but the average cosmetic dentist prefers composite the material is more controversial now than ever before. Some worry the silver/mercury alloy may cause health problems, while others think it's still superior to tooth-colored composite fillings.

When dentists were asked about amalgam restorations in a recent Wealthy Dentist dental marketing survey, 66% said they tell patients that they have other costmetic dentistry options. Another 22% tell patients about potentially safer options; many of these dentists no longer use any amalgams at all. However, 12% say they prefer placing amalgams.

Dental amalgam is an alloy of mercury, silver, and other metals. The FDA says amalgam is safe, but some disagree. The primary alternative is composite, a tooth-colored resin.

Lots of dentists think mercury fillings are perfectly safe. "I have 40 year old silver in my mouth and no concerns whatever," offered an Oregon dentist. "Mercury poison causes mercury poison symptoms. To my knowledge amalgam fillings never have. They try to blame amalgams on every disease under the sun. Why do people without fillings get the same diseases?" asked a Kentucky dentist.

Amalgam is seen as an old-fashioned material by many. "It was an excellent material for 90 years, but more biocompatible materials are now available," declared a Georgia pediatric dentist. "At least a half a dozen countries in Europe have now done away with amalgam. Don't kid yourself; we are just a stone's throw in the US from the same ruling," warned a Colorado dentist.

Some dentists prefer amalgam because of its superior longevity. "They last much longer than composite... It is a travesty to not offer amalgams at all," declared a Canadian dentist.

Dental amalgam is most often used to restore back teeth, where its metal color is less visible. "Next to gold inlays/onlays, amalgam fillings are the longest lasting and sturdiest posterior restorations that exist," said a Virginia dentist.

In addition, amalgam is a lot more affordable than gold (or even composite). "It's a safe, cost-effective restoration," said a New York dentist. "If it's banned, the cost of dentistry would increase and the poor would be the most to suffer."

Since mercury is a known toxin, some recommend caution. "Why should we have raw mercury in our offices?" asked a California dentist. "If there is a spill you need a Haz Mat team to clean it up and a risk to the staff with possible legal consequences." A Connecticut dentist added, "Remember smoking used to be a great thing too!"

A few dentists recommend patients with amalgam fillings get them all replaced, but many feel it's unethical to overstate the danger. "It is malpractice to tell the average patient who has no allergies to the components in amalgam that these restorations are a threat to their health. Patients have a right to a choice, but that choice needs to be based not on the dentists' bias but on facts," said a Pennsylvania dentist.

Mercury's unique properties can cause amalgam fillings to expand, sometimes causing permanent tooth damage. "With time they undoubtedly cause cracks in teeth," said a Tennessee dentist. "They take more tooth structure away than necessary," agreed an Oklahoma dental hygienist.

Lots of dentists no longer place amalgam. "I stopped doing them 24 years ago. I would not place something in a patients mouth that the government does not allow in their sewer systems," said one pediatric dentist.

To the average cosmetic dentist, it's simply a matter of aesthetics. "[Amalgam fillings] are still the best, but ugly..." sighed a Texas prosthodontist.

"Cosmetic dentistry favors more aesthetic composite fillings," said Jim Du Molin, dental management consultant and founder of the dental website The Wealthy Dentist. "However, it's clear that lots of dentists still love amalgam. And though the mercury might be dangerous, composites have not been proven to be perfectly safe either. What's a consumer to do??"