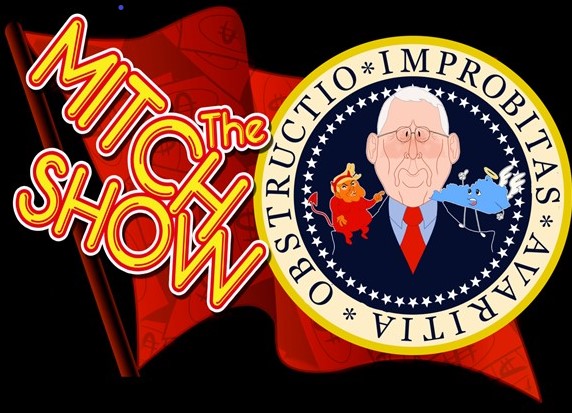 Louisville, KY, September 01, 2020 --(PR.com)-- Anyone who wonders what’s next for Sen. Mitch McConnell should Kentucky voters throw him out of office in November can find out when The Mitch Show debuts online, Tuesday, Sept. 8.

A talented group of Kentucky writers, actors, directors, artists, and comedians have banded together to produce a satirical talk show, hosted by a fictional version of McConnell; available on YouTube, Facebook, Twitter and Instagram beginning at 7 p.m. EDT Tuesday, Sept. 8. Previews and information about the show can be found at www.mitchshow.com
Louisville actor/comedian Nathan P. Woodard plays McConnell, the show’s bumbling host. He shares the stage with McConnell’s purported sidekick and bandleader, played by a puppet named Little Rand, who directs his band, The Libertones.

Kentucky comedians Mandee McKelvey, Vidalia Unwin, and Keith McGill join Woodward to round out the show’s ensemble cast and writing staff. “It’s way past time that voters toss him out... 36 years is an amazing amount of time to fail at something,” said McKelvey. “You know how some drug addicts will sell their own children or murder a stranger just to get their fix? Well, Mitch McConnell is like that. Except his drug is political power. And he’s selling your children and murdering you. It’s time to elect new leaders,” said Unwin. “It occurred to us that comedy, satire and entertainment were the best way for us to convey that message,” McGill said. "When people are laughing, they're listening. And, later, voting!"

The comedian Woodard, who has previously played McConnell at live comedy events around Kentucky, says the talk-show format gives him an opportunity to expand his satirical portrait of the Senator. In his role as the Senate Majority Leader turned talk show host, Woodard portrays McConnell botching his monologue, embarrassing himself during game-show contests and bickering endlessly with his sidekick/band leader Little Rand.

While the show is intended to entertain and make people laugh, there is a serious component too. Woodard, portraying McConnell, will interview real Kentuckians on the show, such as Martin County school board member Mickey McCoy.

In the show’s premiere, McCoy confronts “McConnell” about his lack of response to the Massey Energy coal slurry spill. The disaster dumped 306 million pounds of toxic sludge into the Tug Fork River watershed in 2000. Repercussions from the disaster still plague residents of Martin County, where the public water system is compromised to this day. Groundwater is still unsafe to drink in and around Inez, Ky., McCoy’s hometown. The talk show’s McConnell responds to McCoy incredulously, “We fined them $5,600. Wasn’t that enough?”

The show also will feature musical guests. The Kentucky rock group MOTOCOP appears in the show’s premiere, performing “I’ve Been Thinking,” a song written specifically for The Mitch Show.

To raise money for the show, organizers formed a federal SuperPAC, We Are the Deciders, LLC, and registered with the Federal Election Commission. Like everything else about The Mitch Show, the SuperPAC is purely grassroots. The PAC has raised enough money to fund the pilot. If people like the show, they can donate to the PAC to pay for more episodes. All the political views and content in the show is paid for by We Are the Deciders, LLC, which is not affiliated with any candidate or political party.

“The COVID pandemic has brought into sharp focus how precarious and alienating life feels for the majority of Americans,” said Woodard. “Aside from the obvious gratification of getting to poke fun at ridiculous, self-dealing politicians like McConnell, we hope we can create some energy around the idea of electing new leaders who actually represent the interests of the people.”

Paid for by We Are the Deciders, LLC. Not authorized by any candidate or candidate’s committee.