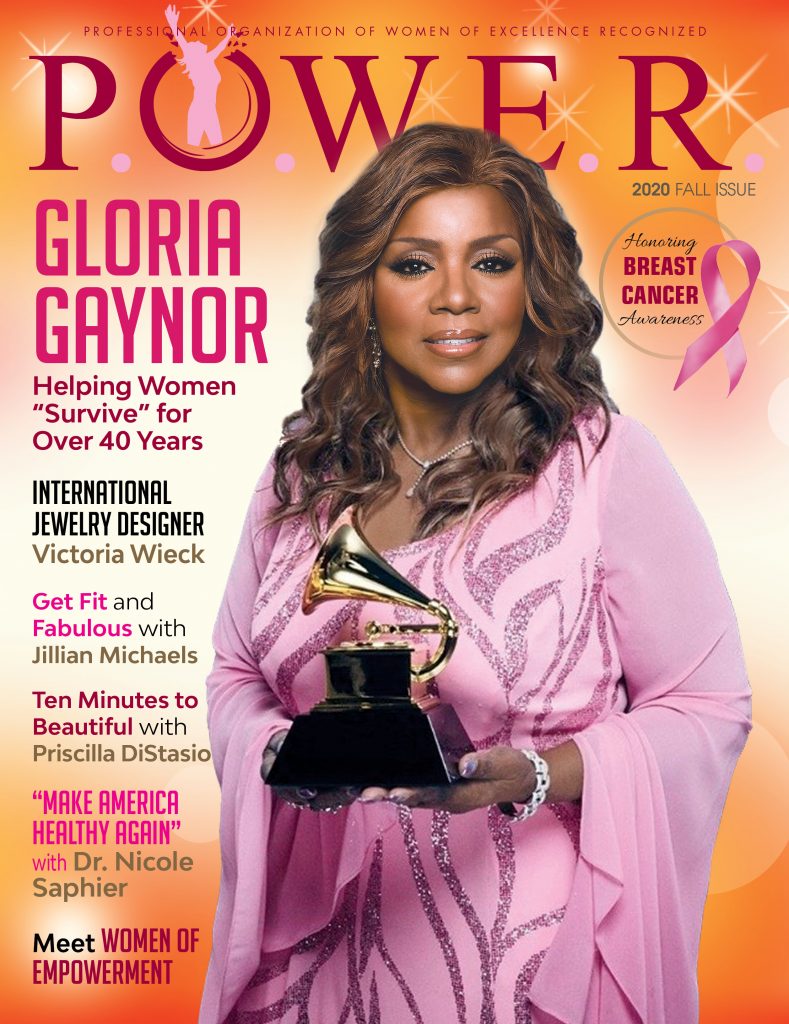 Manhasset, NY, September 22, 2020 --(PR.com)-- The Fall 2020 issue of P.O.W.E.R. Magazine-Professional Organization of Women of Excellence Recognized highlights successful and compassionate women who have taken their experiences and used them to create positive pathways to help others. It also honors Breast Cancer Awareness Month with several articles to help women learn more to fight the fight.

About Some of the Successful Women Who Are Also Helping Others
The Fall 2020 issue of P.O.W.E.R. Magazine showcases talented women who have taken their abilities and experiences and created new meaning for them as a force of good to help others.

Cover girl and disco diva, Gloria Gaynor burst on the scene in the 1970’s, releasing hit after hit. Her smash single, “I Will Survive” won Gloria her first GRAMMY®. The song became an anthem of female eman­cipation honoring women getting out of bad relationships. Years later, this song has taken on a new meaning for women fighting cancer. Gloria Gaynor has performed the song for numerous cancer fund raisers. She sang it at a suburban mall with 200 breast cancer survivors and supporters joining her as back-up dancers. She even changed the lyrics to make a corresponding music video used by the Miami Children’s Hospital to raise aware­ness and funds for their lifesaving efforts. “I Will Survive” has morphed into the anthem for cancer survivors everywhere. Gloria Gay­nor has channeled her fame and recognition into support for several charities, donating not only her money but her time and talent.

Dr. Nicole Saphier is a ra­diologist and the director of breast imaging at Memorial Sloan Kettering-Monmouth in New Jersey. She is well known for provid­ing her medical expertise as a contributor on Fox News, Fox Business, and Fox Nation. While Nicole was in medical school her grandmother died from advanced breast cancer. She decided then that she wanted to dedicate her profes­sional life to early detection, intervention, and prevention of cancer to lessen the burden of preventable illness and death.

Gretchen Scott is a de­signer for her company, Gretchen Scott Designs. She began in her living room creating unique flowered baskets. The company quickly outgrew the space and evolved into a lifestyle brand. Gretchen knew her clothes could also be used to raise and do­nate money for many charities. The com­pany’s first philanthropic project was raising money for Elizabeth’s Hope, the founding root of the Children’s Brain Tumor Project at Weill Cornell.

Leading fitness ex­pert, Jillian Michaels is a renowned nutrition­ist, and wellness entrepre­neur. In the past decade, her company, Empow­ered Media, has become a monumental wellness empire. As a Syrian, Jewish, gay woman with a bi-racial family, who would be persecuted living in nearly 80% of the world, Jillian appreciates the luxury of living and thriving in America. Knowing this, she has become a fierce advocate for refugees and works with UNHCR, the UN Refugee Agency, to bring awareness to the global refugee cri­sis. Jillian feels the global refugee crisis is the largest humanitarian crisis of our time, and it’s crucial that she shows her solidarity, increases awareness about refugee issues, raises money to protect refugees, and helps them to re­build their lives.

Famous jewelry designer, Victoria Wieck was born in South Korea, and moved with her family to the United States when she was 12 and was deeply inspired by the beauty found in everything around her. Her family started their life in America with only $30. Victoria is also an author who is currently writing a how-to book, “Turning Your Ameri­can Dream into Reality” (working title). This book is about her own unique journey, proven methods of starting a business without taking unnecessary risks, and helping others through her own experiences. A portion of the pro­ceeds will be set aside for various charities to help others.

Yeardley Smith is known for her role as Lisa Simpson on the animated television series “The Simpsons.” For this role, she received a Primetime EMMY Award® for Outstanding Voice-Over Performance in 1992. Yeardley has appeared in several films and also performed a one-woman off-Broadway show, called “More” in New York City. As a bulimic for many years, Yeardley finally found help through an outpatient program at UCLA specifically for eating disorders. After doing a Marc Maron podcast where she talked about her bulimia in detail, Yeardley got an incredible email forwarded to her from a woman who had listened to the podcast and was finally going to get help. That experience made her realize that she can have a positive effect and make the world maybe a tiny bit brighter on any given day through being open about her own journey. Yeardley Smith is also a strong advocate for the LGBTQ+ community to support the cause and the human rights campaign.

Tonia DeCosimo, the founder and editor-in-chief of P.O.W.E.R. and P.O.W.E.R. Magazine, believes it is important for women to use their talents and gifts to help each other whenever pos­sible. The Professional Organization of Women of Excellence Recognized is passionate about cancer awareness and through P.O.W.E.R. Magazine, provides articles about cancer care, cancer survivors, and cancer assistance information to help women learn more to fight the fight. Profiles about their hard working, talented, and compassionate members in all different industries will inspire women toward new avenues to explore.