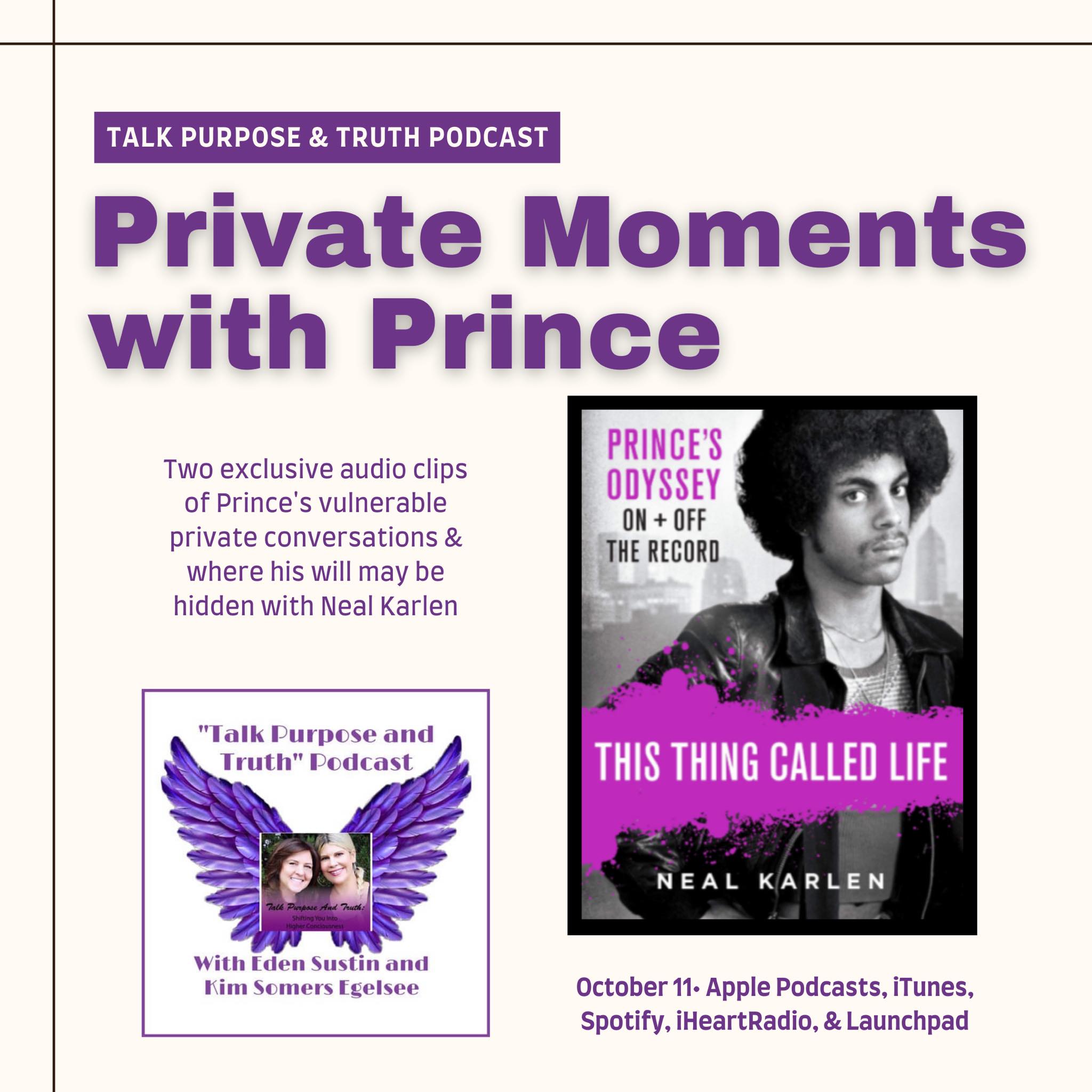 Los Angeles, CA, October 13, 2020 --(PR.com)-- The 72nd episode of the highly acclaimed weekly podcast Talk Purpose and Truth features rare and exclusive audio clips of the legendary music artist Prince. It was released on October 11, 2020. The clips are shared by guest and Prince confidante Neal Karlen, a journalist and author whose bestselling book, "This Thing Called Life: Prince’s Odyssey On and Off The Record," is available now via St. Martins Press.

As Prince’s "personal journalist" and close friend, Karlen shared a deep and true friendship with the iconic singer, profiling him in three cover stories for Rolling Stone magazine. Karlen joins Talk Purpose and Truth hosts Eden Sustin and Kim Somers Egelsee for a 45-minute conversation that reveals some of Prince’s innermost secrets and plays multiple audio clips he recorded with Prince over the years.

In one of these exclusive clips, Prince is heard saying, “I do feel like a prisoner sometimes. I could be in my car and when that happens I think too much and I can’t sleep from having just so many things like that in your head.” Plus, a surprise guest who worked closely with Prince joins the podcast and shares more unique and untold stories.

Regular listeners of Talk Purpose and Truth know that Prince is a familiar topic, as past episodes of the show have featured other friends of the singer. In episode 25, his ex-girlfriend, Playboy Playmate (June 1985) Devin DeVasquez, shared secrets and insights into their love life. Also, in episode 63, Hollywood producer and Academy Award winner Cindy Cowan, who got engaged at Prince’s home, discusses their friendship. Episode 55 featured Prince’s session singer Jana Anderson and bodyguard Big Chick, who shared their own secrets and stories. With all of this insight, the hosts are currently preparing a profound book, channeled word-for-word from Prince’s spirit, expected to be released soon.

About the Podcast:
Talk Purpose and Truth: Shifting You Into Higher Consciousness is a weekly podcast that elevates, uplifts and encourages listeners to grow, heal, awaken and evolve. It is hosted by Eden Sustin, a physical medium known for channeling loved ones and celebrities from the beyond, and Kim Somers Egelsee, an Intuitive, #1 best-selling Author and award winning Tedx Speaker.

The podcast covers bold and hot topics that expand its listeners’ awareness and may even surprise and even shock at times. Past guests include such celebrities as Christina Moses, Brianna Brown Keen, Scheana Shay, Justin Guarini, Chance Hurstfeld, William McNamara, J.R. Martinez and Rob Mack. They share intuitive readings and channel messages from beyond, including from celebrities. It can be found on Apple Podcasts, iHeartRadio, Spotify and https://www.launchpaddm.com/pd/talkpurposeandtruths-podcast
Contact
Talk Purpose and Truth Podcast
Kim Somers Egelsee
714-423-8174
www.kimlifecoach.com