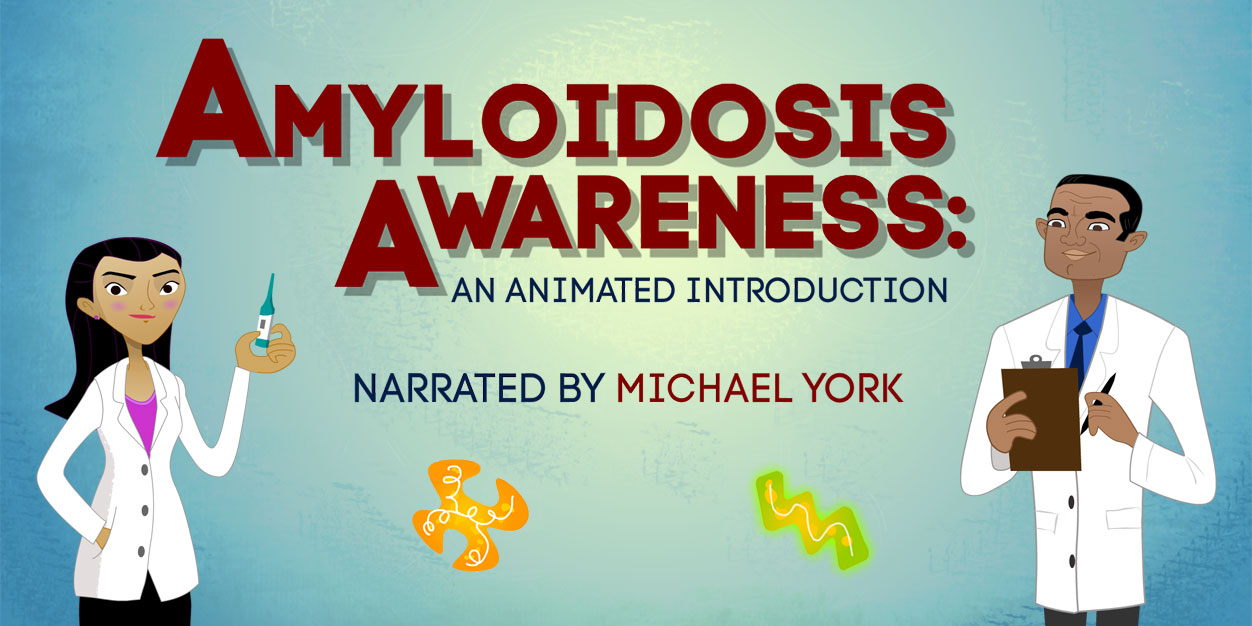 York’s grace, charm, and wit are well-remembered in such classic films as Cabaret, Logan’s Run, The Island of Dr. Moreau, and Austin Powers.

About 10 years ago, however, York’s health began to suffer from bone marrow cancer and an under-diagnosed condition called amyloidosis. This rare disease represents one class in a growing list of protein misfolding disorders. It’s a similar kind of illness which accounts for other commonly known degenerative conditions like Alzheimer’s and Parkinson’s disease.

One of the common symptoms of amyloidosis is swelling of the tongue, which makes it more difficult to speak clearly. York said in an interview at the time: “I lost my voice completely. Which, for an actor, is a bit alarming. Now it’s sort of back.”

With his health recovering, York offered his vocal talent for a nonprofit educational initiative to promote awareness of amyloidosis. A short animated film was produced to help physicians, medical students, patients, and their support network to better understand and care for the insidious disease. Though his narrator voice by then was somewhat raspy, York’s spirit nonetheless shined through and hearkened back to his golden voice of yesteryear.

The project has since been of wide-reaching service among conferences, universities, clinics, meetings, and communities worldwide. Within the last year, because medicine and science are continually improving, it became necessary to update the animated film with new dialogue.

Initially, the nonprofit team hoped to record York’s additional voiceover to make the edits. But it quickly became clear that the new audio was not going to be an effective match with the original narration.

As well, there was no viable prospect of finding another actor who could impersonate York’s unique vocal quality, especially in the production time available. And, of course, existing text-to-speech software certainly would not be able to mimic York’s signature tone and cadence.

"When we were approached to update an educational video with new voiceover narration from legendary actor Michael York, our options were limited.

"For almost a decade, Mr. York has been managing a health condition that has impaired his beautiful, mellifluous voice. Enter, stage right, the heroic efforts of Respeecher’s amazing team!

"It’s been said, famously, that any sufficiently advanced technology will be indistinguishable from magic. Truly, given our creative constraints, Respeecher was uniquely able to pull a rabbit out of a hat.

"Their source/target conversion of Mr. York’s speaking voice demonstrably opens doors for the entertainment, education, and healthcare fields. Suffice it to say, it was an absolute honor to collaborate with Respeecher.

"Their brilliant accomplishment and timely delivery have allowed our humble project to be a success, exceeding our expectations for what’s even possible."

Because of the ongoing global pandemic, a member of the production team recorded 60 minutes of source training audio, along with the new dialogue pickups, at a home studio.

Respeecher then created an AI model to match the source voice with York’s target voice, using raw data from the animated film’s original recording session from long ago.

With regards to the voice cloning, York offered his kind congratulations, “Bravo to the entire team for a quite extraordinary achievement! The quality of the re-worked passages is indistinguishable from the original.”

He went on to say: “How very grateful I am to Respeecher for giving my words and work a whole new lease on life. The technique involved is as ingenious as it is amazing, and promises an unlimited future for all those involved in voice work. With Respeecher, history comes almost miraculously alive again. I heartily and thankfully endorse this great product.”

Respeecher continues to pioneer and innovate voice cloning technology, such as fine-tuning its capacity to manage seamless source-to-target conversion of language accents.

"As we broaden and strengthen our platform, we look forward to working with individuals and studios to extend the longevity of their talented voice careers.

"Moreover, we’re already living in the future. Whether because of disability, trauma, or other health conditions, we can help to recreate and reinvigorate an ailing or lost speaking voice.

"Increasingly, people who are no longer able to communicate will be able to do so using a voice synthesizer, even controlled by their minds. We only have to imagine the possibilities. But that’s another story, for another time."

Listen to the audio recordings: https://www.respeecher.com/blog/respeecher-gives-voice-michael-york-healthcare-initiative